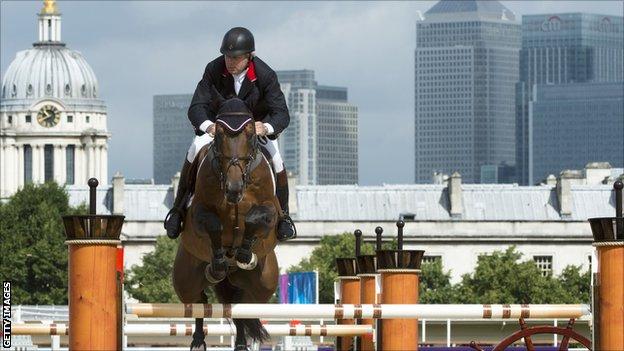 Great Britain will head into day two of the team showjumping in joint second place after ending the first qualifying round with four faults on Sunday.

Saudi Arabia lead on just one penalty fault, with GB level with the Netherlands, Switzerland and Sweden.

Ben Maher and Nick Skelton had jumped faultless rounds for GB and they looked to be heading for a third before Scott Brash clipped the last fence.

Peter Charles was the final GB rider but the fourth score is discounted.

Canada are also well placed on five points in third, but they suffered a blow when Tiffany Foster's horse Victor was disqualified from the team and individual competition at Greenwich Park.

It was a nice course, and Big Star is jumping unbelievably at the moment. He's got everything and is in great condition

In a statement, the Federation Equestre International said: "The Canadian horse Victor, ridden by Tiffany Foster, has been disqualified under the FEI's hypersensitivity protocol due to an area of clear and obvious hypersensitivity on the front of the left forelimb."

Skelton was thrilled with his round on nine-year-old stallion Big Star.

"He felt amazing, he looked amazing, but he is amazing," said Skelton. "It was a nice course and he is jumping unbelievably at the moment. He's got everything and is in great condition."

Maher added: "We wanted, in theory, to get two strong horses out with clear rounds at the start and it couldn't have gone any better.

"This is a tough competition. There are a number of rounds day on day and the course was testing enough today."

Brash, meanwhile, was disappointed not to make it a hat-trick of clear rides for the British.

"I don't feel like I did anything wrong," he said. "I just need to go back and look at the video and see exactly what happened at fence 13."

Charles, who collected eight faults on Vindicat, added: "It was a bit of a building round for me today after He is a nervy horse and he freaked out yesterday. It is as simple as that."

Saudi Arabia were helped by another strong round from Prince Abdullah Al Saud of Saudi Arabia, a grandson of King Abdullah.