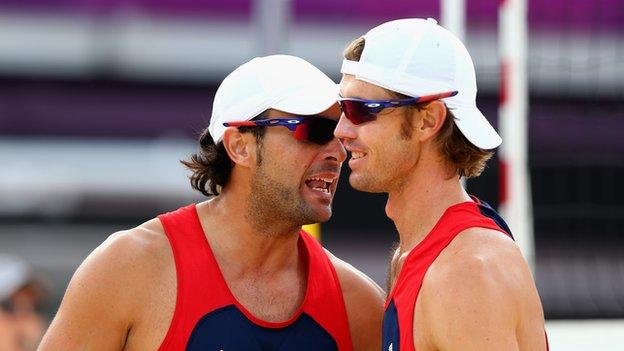 British pair Steve Grotowski and John Garcia-Thompson put in a spirited display as they lost 2-0 to Brazil's Ricardo Santos and Pedro Cunha.

The world number three team established a 12-5 lead in the first set, only for GB to pull it back to 19-17.

The Brazillians claimed the next two points though, winning the set in a superb back-and-forth rally.

They closed out the match by taking the second set 21-12 and consigned GB to back-to-back losses in Group F.

GB will need to beat the Norwegians on Wednesday to stand a chance of finishing third in the group and reaching the last 16.

Poland's Grzegorz Fijalek and Mariusz Prudel produced an upset by overcoming the USA's world number one team of Jacob Gibb and Sean Rosenthal 2-0 in Group D.

In the women's event Brazillian world champions Larissa Franca and Juliana Felisberta moved to the top of Group A with a 2-0 victory over Katrin Holtwick and Ilka Semmler of Germany.