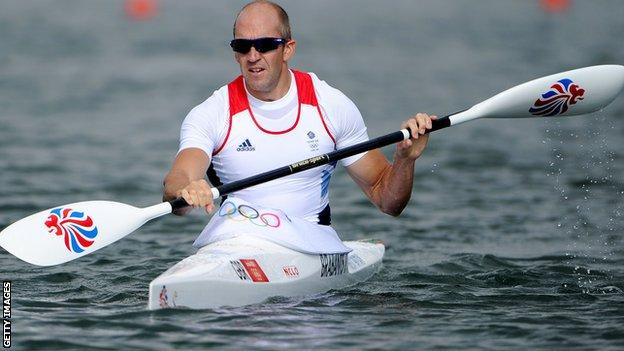 Brabants, who had surgery in 2010 on a pectoral tendon injury, was the last of four qualifiers from his semi-final.

Having put his medical career on hold for one last shot at Olympic glory, he snatched qualification by only 0.049 seconds.

"It was a tough race, so I'm really relieved with that result," Brabants told BBC Sport. "Unfortunately, I drew the outside lane on the really bad side of the course, but the roar of the crowd was incredible and pushed me on.

"I'm not quite in Beijing shape, but I feel good. I'm in the final and anything can happen."

Brabants took a year off from the sport after winning gold in Beijing, returning to his day job as an accident and emergency doctor.

On returning, he had to overcome illness and injury before beating Paul Wycherley in a race-off in May to secure his Team GB place.

After easing through his heat, the 35-year-old went off hard at the start of his semi-final, running second at half-distance. But he struggled to maintain that pace and dropped back in the remaining 500m.

After crossing the line virtually neck-and-neck with Bulgaria's Miroslav Kirchev, Brabants was left with a brief but nervous wait before good news flashed up on the big screen.

The British quartet of Cawthorn, Walker, Hannah and Sawers finished second in their heat to miss out on an automatic place in the final but progressed after finishing fourth in the subsequent semi-final.

Britain's Richard Jefferies missed out on the C1 1000m final after finishing eighth but will compete in his stronger event - the C1 200m - on Friday.