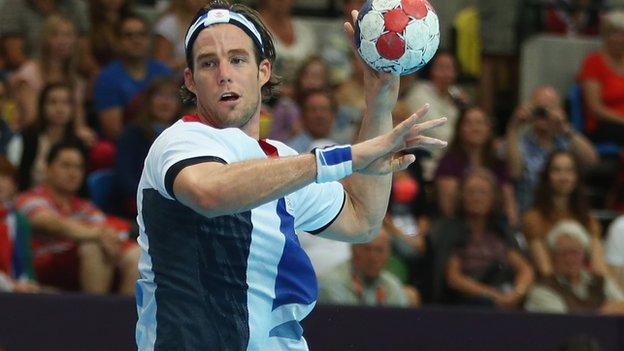 Great Britain's men produced their best display in the Olympics but lost out 41-24 to Pool A winners Iceland.

After defeats by Argentina, France, Sweden and Tunisia, GB wanted to end their campaign with a strong showing and in patches they did.

They trailed 18-15 at the break, before tiring in the second half to lose all their matches, just like the GB women.

Iceland's win saw them qualify for the quarter-finals, with a maximum 10 points, where they will face Hungary.

Croatia won Group B as they beat Spain 30-25 and will now meet Tunisia on Wednesday.

Steven Larsson top-scored for Great Britain against Iceland with nine goals, with Gudjon Valur Sigurdsson's eight helping his side towards victory.

Despite the negative results for Team GB the sport has captured the imagination of the British public during the opening week of the London Games.

British Handball chief executive Paul Goodwin told the BBC that he is confident there will be a lasting legacy following their Olympic debut.

"The response we have had during the Games is phenomenal," he said.

"Young people are getting something out of it - our website crashed three times earlier in the week with people trying to find out more about the sport," said Goodwin.