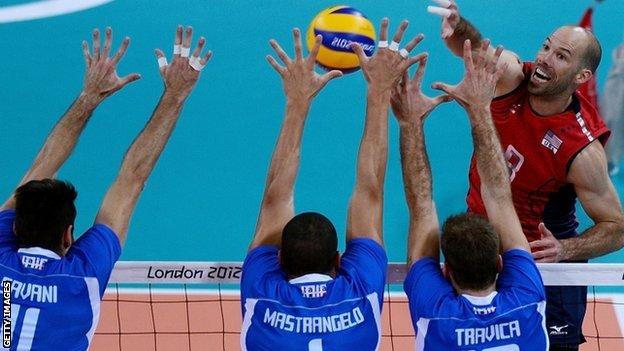 Defending champions United States were knocked out of the men's volleyball competition as Italy wrapped up a 3-0 win at Earls Court.

They will meet 2008 silver medallists Brazil, who earlier saw off Argentina 3-0.

In the other semi-final, Russia, who beat Poland 3-0, will play Bulgaria after they won 3-0 against Germany.

The US were only ranked fifth for the London tournament after significantly changing their squad since their win in Beijing four years ago.

US captain Clayton Stanley - in what is likely to be his final Games - did his best to offer some resistance with 16 points, but it was not enough to rescue his team.

Russia, from their days as the Soviet Union, lead the all-time medal table with seven gold, four silver and one bronze.

The semi-finals take place on Friday at Earls Court.