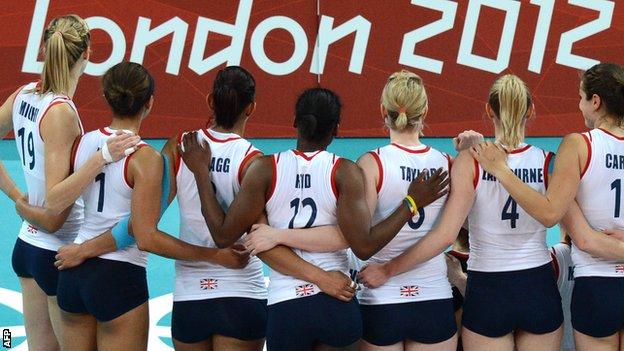 Great Britain have been knocked out the Olympic volleyball tournament after losing their final game to Japan to finish second from bottom of Pool A.

They lost 25-19 25-14 25-12 but victory would not have been enough to reach the last eight as Dominican Republic beat Algeria to make the last eight.

"We competed at times but it wasn't enough," said captain Lynn Beattie.

"The main thing we can take is competing against the best teams in the world, that's an experience in itself."

The GB captain added: "The next step is taking sets and wins against these teams."

The defeat at Earls Court was GB's fourth out of five, with their only victory coming against Algeria.

Dominican Republic and Japan qualify for the quarter-finals from Group A along with Russia, who beat Italy 3-2 to go through as group winners along with the Italians.

USA won Group B with a comfortable 3-0 win against Turkey while China's 3-2 victory over South Korea ensured they finished second. South Korea and Brazil also reached the last eight.