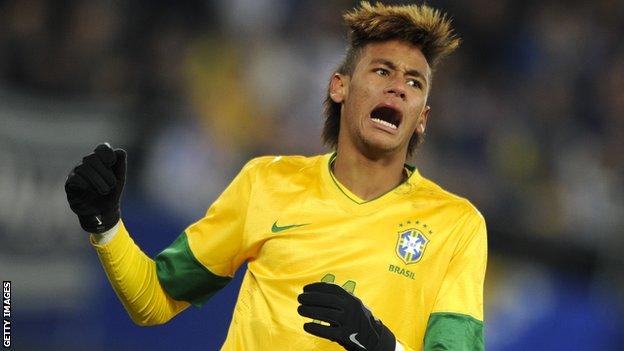 Stuart Pearce says the Olympic Team GB men's football selection process should have been different, claiming "there's players not here who should be".

Pearce's side are in friendly action on Friday against gold medal favourites Brazil, who are expected to feature Neymar and Oscar.

Pearce told BBC Sport he should have been allowed to select under-23 players who took part in Euro 2012.

"We have to take our best to every tournament we possibly can," he said.

Pearce's remarks represent a U-turn after he had originally described the Football Association's decision to rule England's Euro 2012 players out of the Olympics as a "sensible football decision".

Goalkeeper Jack Butland is the only player who travelled with England to Euro 2012 who is in the Olympic squad after receiving special dispensation.

Danny Welbeck, Jordan Henderson and Alex Oxlade-Chamberlain were among the under-23 players who featured for England at Euro 2012.

And Pearce believes he should have been allowed to include the trio in his Olympic squad.

"At another time after the tournament has finished when I'm expected to debrief my employers, I'll make that clear that maybe there are one or two individuals not here that should have been here," added Pearce.

"I'll continually send the same message out that we have to take our best to every tournament we possibly can.

"Not just for the sake of the manager or for the coach, but for the players themselves - they have to experience tournament football."

Meanwhile, Pearce says his players are not yet ready for the Olympics.

He hopes the match with Brazil at Middlesbrough's Riverside Stadium will help push them in the right direction before Team GB launch their tournament against Senegal at Old Trafford on 26 July.

"We want to bring them to the boil around the Senegal game," said Pearce. "We know we are not where we want to be at the moment.

"We need to be peaking for the Senegal game and we have to accept that we are going to get fitter and stronger day by day."

Brazil have named a strong squad for London 2012, and coach Mano Menezes is expected to give most of his players a run-out at some stage against Team GB.

Santos forward Neymar has been linked with a move to Chelsea, while there has been speculation that the Blues could also move for Oscar.

Pearce will use the friendly to make a decision on whether striker Daniel Sturridge will feature at the Olympics.

The Chelsea striker is battling for fitness after being diagnosed with viral meningitis and remains a doubt for the tournament.