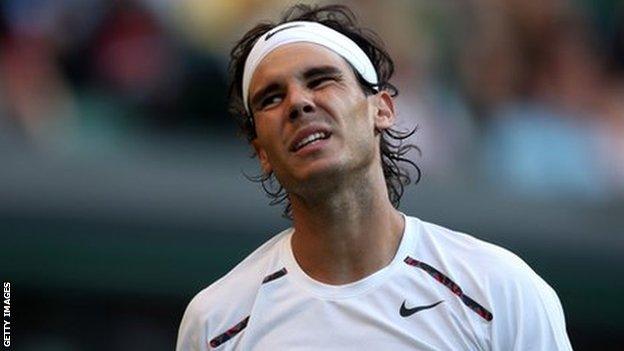 Defending Olympic champion Rafael Nadal has pulled out of London 2012, saying he is "not in condition" to compete.

The 26-year-old is suffering from tendinitis of the knee and will be unable to defend the singles title he won in Beijing in 2008.

"I do not find myself in a condition to compete," he said. "It is one of the saddest moments of my career."

"Nadal's ecstatic reaction to his gold medal in Beijing was one of the great memories from the games of four years ago.

He left everyone inside the stadium in no doubt about how much Olympic tennis meant to him. But Nadal is still struggling with his long-term knee complaint and now plans to return on the American hard courts, where at least his preparations should have a head start.

The Toronto Masters, a mandatory event on the tour, starts the day after the Olympic Tennis Final."

The Spanish 11-time Grand Slam winner was expected to carry his nation's flag during the opening ceremony in London.

Nadal, ranked third in the world, became the first top-five male to win the Olympic singles when he beat Chile's Fernando Gonzalez in the final four years ago.

"I am not able to compete at the Olympics in London and therefore will not be traveling as planned with the Spanish delegation," he said in a statement on the Spanish federation (RFET) website.

"I have to think about my colleagues. I cannot be selfish and I have to think of the good of Spanish sport, especially Spanish tennis, and let a team-mate who is better prepared to compete.

"I've waited until the final moment of my preparation and my training, but I cannot do it."

The RFET said world number 30 Feliciano Lopez would replace Nadal, while the country's Olympic committee will select a new flag bearer at a meeting on Friday.

Nadal has a history of knee problems, with tendinitis ruling him out for much of the 2009 season and more recently forcing him to withdraw from a charity match against Novak Djokovic.

The two-time Wimbledon champion has not competed since his second-round exit at the All England Club in June, where he

He will be hoping the prolonged break will increase his chances of being fit for the US Open, which begins on 27 August.

The 34-year-old broke his collar bone in a fall during stage eight of the Tour de France, forcing him to pull out of the race.

"Although he is in good physical shape, he is still suffering a certain amount of pain in his hand and shoulder," said Spanish team coach Jose Luis de Santos.

"He was struggling to hold the handlebars and to change gears which could have been dangerous in a race. For this we have decided he won't go to London."