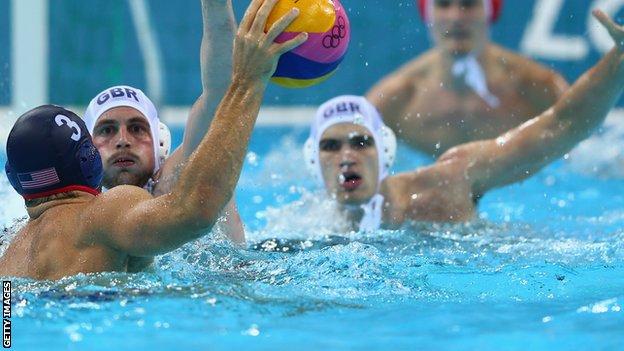 Great Britain's men ended their Olympic water polo campaign with a 13-4 defeat by Montenegro to finish with no points from their five matches.

They were also beaten by Romania, Serbia, the United States and Hungary to match Kazakhstan's winless record at the Games.

Serbia, Hungary, USA and Montenegro all go through to the quarter-finals.

In the other group Croatia, Italy, Spain and Australia progressed to the knock-out stages.

Serbia confirmed their top spot in Group B with a 12-4 win over Romania, while Hungary ensured they finished ahead of the USA by beating them 11-6.

In Group A, Croatia continued their dominance by ending qualification with a 100% record thanks to a 12-4 win over Kazakhstan.

Italy took second place after a 10-7 win over Spain in their final preliminary match.

Australia ensured their progress by beating Greece 13-8 to secure the last quarter-final place.