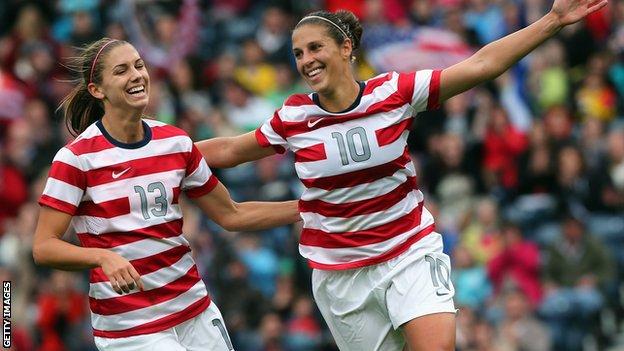 Defending Olympic champions the United States secured a last-eight place in the women's football tournament with a 3-0 win over Colombia at Hampden Park.

Megan Rapinoe opened the scoring in the 33rd minute before late goals by Abby Wambach and Carli Lloyd sealed victory.

Also in Group G, Laura Georges and Elodie Thomis were among the scorers as France hammered North Korea 5-0.

Canada can still advance from Group F after a 3-0 win over South Africa while Sweden and Japan drew 0-0.

Melissa Tancredi's second goal of the tournament set Canada, who lost 2-1 to Japan in their opening match, on their way at the City of Coventry Stadium.

Christine Sinclair struck in the 58th and 86th minutes to leave South Africa, who face World Cup winners Japan at the Millennium Stadium on Tuesday, bottom of the group.

Sweden enter the third and final round of group games top of their table with four points from two games.

Yet they still need to avoid defeat against Canada at Newcastle on Tuesday to go through to the knockout stages.

Marie-Laure Delie, Wendie Renard and Camille Catala also found the net for France against North Korea, whose unhappy tournament continued after their first match against Colombia saw the team walk off the pitch when their images were shown on a screen beside a South Korean flag.