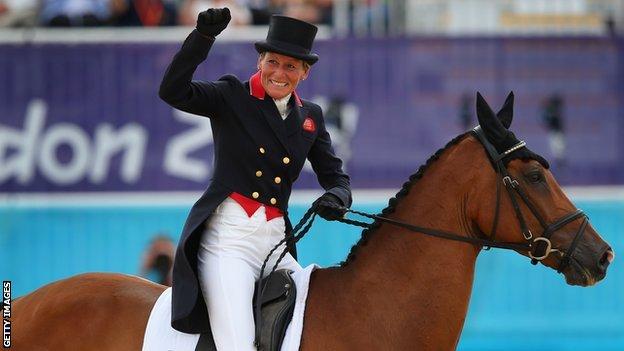 King, competing in her sixth Games, was clearly moved by the support of the Greenwich Park crowd and rode Imperial Cavalier to a score of 40.90 penalties.

Nicola Wilson was the only other Briton to take to the Greenwich Park arena, finishing 16th with 51.70 points.

"Germany are in a very strong position with the top two places individually ahead of Mary King. And they have a healthy lead in the team competition ahead of Australia in second and Great Britain in third.

"But, unlike the Germans and the Australians, Britain have only had two riders go so far and among those waiting in the wings are the world number one William Fox-Pitt and Zara Phillips."

Tina Cook, a bronze individual winner in Beijing, William Fox-Pitt and Zara Phillips all ride for GB on Sunday.

The Germans provisionally lad in the team competition, with Australia second and Great Britain third.

King, 51, who made her Games debut at Barcelona 20 years ago, will go into the cross country phase of the competition behind the German duo of Ingrid Klimke (39.30) and Dirk Schrade (39.80).

"The atmosphere was absolutely fantastic," King said. "I am not usually tearful, but coming into the arena with the crowd so behind me and being so good at keeping quiet when I came in was amazing.

"I knew if they all cheered and roared, Imperial Cavalier would have exploded and I would have found it hard to ride the test.

"Although they were really behind me, they were also ever so well behaved and kept nice and quiet until the end.

"We made a couple of errors, especially that last flying change when I lost him and he ran a bit to the right which made the change late, but most of his work was really pleasing."