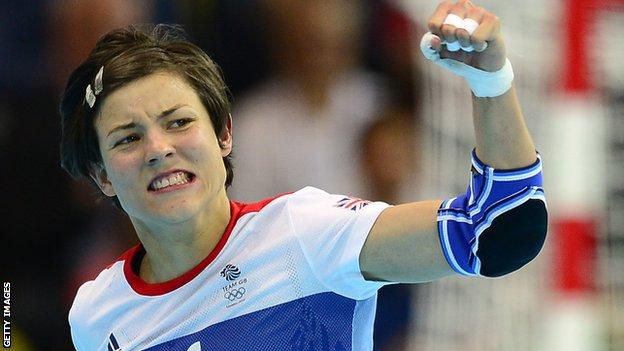 Great Britain lost on their Olympic handball debut, beaten 31-19 by Montenegro at the Copper Box.

Despite the result in Group A, Britain made life hard for their opponents, who are among the favourites to win gold.

Marie Gerbron was the pick of the GB players, scoring six goals, while substitute goalkeeper Jane Mayes pulled off a string of fine saves.

The British team was only set up in 2005 after London won the right to stage the 2012 Games.

Kathryn Fudge scored the team's first goal in the fourth minute, before going on to score a further three goals in the first half.

Gerbron scored her first of the night on 12 minutes and went on to finish as the game's top scorer, one ahead of Montenegro's Champions League winner Katarina Bulatovic.

In the other Group A matches on day one, Brazil beat Croatia 24-23 and Russia ran out 30-27 winners over Angola.

In Group B, three-time Olympic champions Denmark got off to a winning start as they beat Sweden 21-18 and South Korea beat Spain 31-27.

But the shock of the night came in the final match when France beat the reigning Olympic and world champions Norway 24-23.