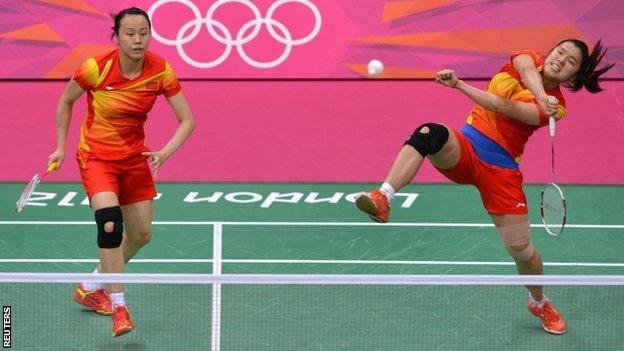 China's Zhao Yunlei won her second gold medal of the London Olympics after partnering Tian Qing to victory in the women's doubles final.

Zhao had won the mixed doubles title with boyfriend Zhang Nan on Friday.

Earlier Russia's Valeria Sorokina and Nina Vislova, one of the pairs reprieved after eight competitors were disqualified, won bronze.

"Our heads said the Chinese would win but the Japanese won our hearts for the way they fought and fought and never gave up. Their defence was incredible and the way they performed was a real credit to women's doubles. It took guts from the Chinese girls and somehow they held their nerve. Zhao has been such a great player at this Olympics and she deserves it."

Zhao and Tian controlled the opening set in the final, and it looked like they would earn a comfortable victory.

But the Japanese pair fought back in the second set and showed some great defence to save three match points before China finally broke through to earn the win and a third gold medal of the competition.

Sorokina and Vislova proved too strong for Canadians Alex Bruce and Michele Li, easing to a 21-9 21-10 win.

Sorokina and Vislova lost three matches during the week, but earned a second chance when four pairings were disqualified after being accused of "not using one's best efforts to win".

The Chinese world number ones, two pairs from South Korea and one from Indonesia made a series of basic errors in Tuesday's matches.

All four pairs were accused of wanting to lose, in an attempt to manipulate the draw for the knockout stage.