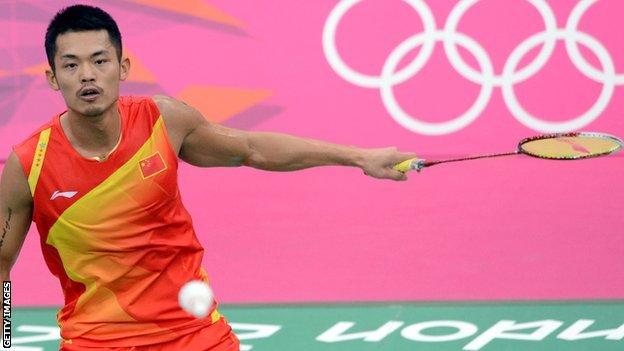 Lin Dan of China is through to the Olympic badminton men's singles semi-finals after a closely fought win over Sho Sasaki.

Can Lin defend his crown?

Three Chinese women will feature in the last four of the women's singles along with Saina Nehwal of India.

Baun started to celebrate as she left a Nehwal shot to drop out, levelling the match at 1-1, but to her astonishment it was called in.

Both came through three-game battles against Denmark's Joachim Fischer and Christinna Pedersen and Indonesia's Tontowi Ahmad and Liliyana Natsir respectively. For the first time in Olympic history, Indonesia will not win a badminton gold medal.

Meanwhile, two of the women's doubles pairs reprieved by this week's match-fixing scandal will play-off for the bronze medal.

Russia's Valeria Sorokina and Nina Vislova will face Canadians Alex Bruce and Michelle Li after defeats in their respective semi-finals to the Tian Qing/Zhao Yunlei and Mizuki Fujii/Reika Kakiiwa partnerships.

Bruce and Li put up the strongest fight, going down 21-13 to the Japanese in the third game.

The men's doubles competition is still at the quarter-final stage.

The other semi-final will be between Korean second seeds Chung Jae-sung and Lee Yong-dae and Denmark's third seeds Mathias Boe and Carsten Mogensen.