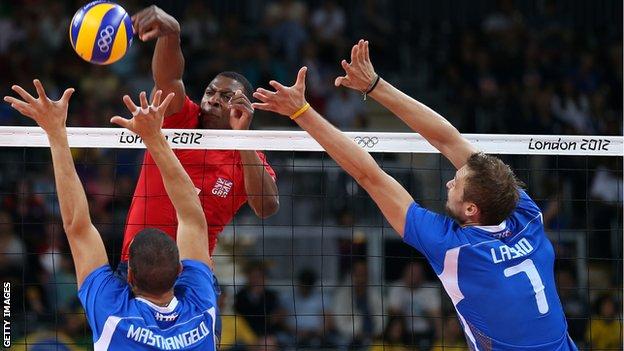 Great Britain lost their third match in a row at the Olympics with a straight sets defeat by Italy at Earls Court.

Italy took the first set 25-19 and then fended off a determined challenge from the British to triumph 25-16 in the second.

The Italians then claimed the third set 25-20 for their second successive victory that lifts them up to third in Group A.

Great Britain are bottom without a win from their three games.

Italy player Michal Lasko said: "They made many mistakes. If you wait, they will make mistakes. With most of the other teams you have to push much harder.

"In the last set we tried something different and played some of the other players who hadn't had much court time."

Meanwhile, Bulgaria maintained their 100% record with a 3-0 victory over Australia, while second-placed Poland defeated Argentina by the same scoreline.

In Group B, defending champions USA battled back from a set down to win 3-1 and hand world number ones Brazil their first defeat in London.

Finally, Germany picked up their first win of the competition as they edged Serbia 3-2.