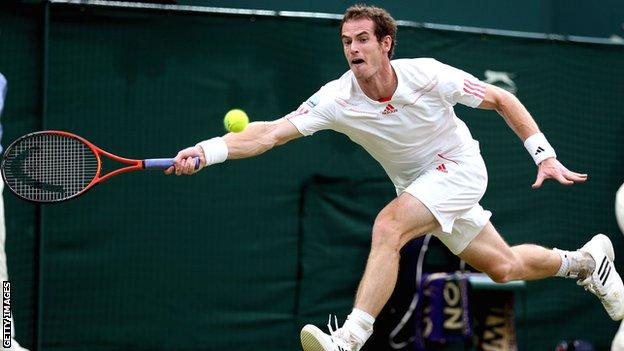 Andy Murray says he struggled to sleep after losing in the Wimbledon final but has put the pain behind him and is now fully focused on winning Olympic gold.

The British number one was left in tears after his Wimbledon loss to world number one Roger Federer.

"The night of the final wasn't easy. I did not sleep too much, it was tough," admitted the 25-year-old.

"I'm feeling positive ahead of the Olympic competition - I really want to do well here [London 2012]."

The Scot added that the first couple of days after losing to Federer were "really hard".

He continued: "I had a few days off where I went go karting with my friends and went to see comedy shows.

"Getting back on the court has helped - I needed to make sure I got over the disappointment quickly."

Murray has not played since Wimbledon and will return to action for the first time during the Olympic tournament, which starts on Saturday 28 July.

The world number four lost to Yen-Hsun Lu in the Beijing Olympics first round in 2008, prompting him to reconsider his build-up this time.

"Last Olympics I played in Cincinatti a week before the Games started and arrived three days before," he said. "It was not ideal preparation and I did not understand how much the Olympics meant to me.

"After I lost, it hit me hard. This time I will have been training for two and a half weeks."

In addition to singles action, Murray will also be playing doubles with brother Jamie, who has claimed he would put success in London ahead of winning any other tournament.

"If I could win a gold medal at an Olympic Games or win a Grand Slam I'd take a gold medal, especially here in a home Games," said the older Murray brother.

"When Andy and I play at our best we're probably as good as anyone else out there and I think we're more than capable of competing with any other nation."

For Baltacha, who was involved in the Olympic torch relay, the Games have an added significance.

"This is very special for me because my dad [footballer Sergei Baltacha] won a bronze medal in the 1980 Moscow Olympics [playing for the USSR] and my mum [heptathlete Olga] was picked to compete but she couldn't go in the end because she had to look after my brother [former St Mirren and Millwall footballer Sergei Jr]," she said.

"It's amazing for me to be an Olympian now and to continue this legacy in my family."