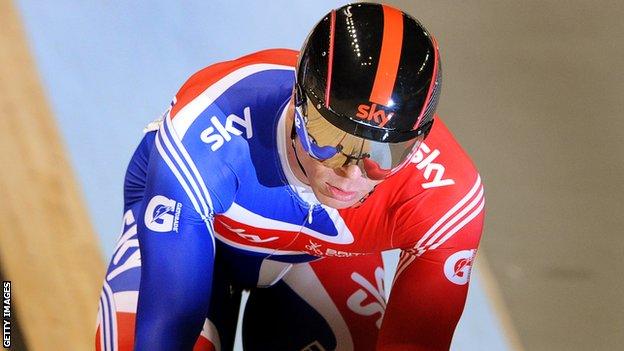 Voting is under way to determine which member of Team GB will carry the Union Flag at the opening ceremony.

The selection of a flag bearer is considered to be one of the greatest honours bestowed upon an Olympian, even more so for the host nation.

The BBC understands Hoy, who carried the flag in Beijing's closing ceremony, is on a nine-person shortlist, with the winner to be named on Monday.

There had been speculation he might miss out, as the track cycling squad had not been due to leave their training base in Wales until the day after the opening ceremony.

How the honour is decided

- Nominations were made by 31 team leaders, who put forward three names each

- The nine most popular choices were put on a shortlist

- The winner is announced on Monday

However, the British Olympic Association (BOA) has indicated that all those who are due to be out of London at training camps on 27 July will be eligible to carry the flag.

The athletics squad will be at its training base in Portugal, but if a member of that squad is selected then he or she will be flown back to London for the ceremony.

A number of rivals to Hoy for the honour have been ruled out by the competition calendar.

Anybody due to compete during the two days following the ceremony will not attend, meaning sailor Ben Ainslie and swimmer Rebecca Adlington will have to settle for watching on television.

Another contender is the rower, Katherine Grainger. She has won a silver medal at each of the past three Games and would be a popular choice.

Others in the running are likely to include diver Tom Daley and marathon runner Paula Radcliffe.

The BOA has altered the flag bearer selection process for these Olympics in order to give the competing members of Team GB a greater say.

Initial nominations were made by the 31 team leaders, who were each invited to put forward three names, with the nine most popular choices placed on a shortlist.

One athlete representative from each sport will now rank their top three preferences from that shortlist and the results will be compiled over the weekend.

One of the challenges for the BOA over the coming days will be to ensure that the Team GB delegation marching behind the flag bearer is as large as possible.

Many of the 542 team members have been told not to attend by their performance directors, who are worried about the negative impact that hanging around for all that time could have on competitors when their events begin.

The majority of the two largest squads will be absent. The athletes will still be at their training camp in Portugal, and the swimming event gets under way the following morning.

High profile names like the Queen's grand-daughter, eventer Zara Phillips, will also be absent because of the competition schedule.

The British Olympic Association accepts that although Team GB is the largest at the Games, it is likely to be dwarfed at the opening ceremony by an American team with many fewer absentees.

Sports like football will be under pressure to help swell the numbers of Team GB members in the stadium by allowing players to attend the ceremony, even though the football competition will already have started.