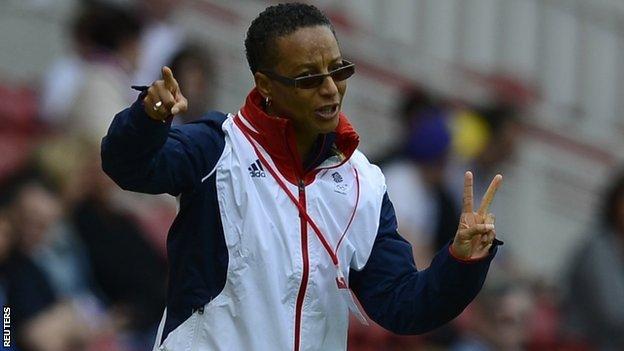 Coach Hope Powell is confident Team GB will produce a strong advert for the women's game when they play New Zealand in a historic fixture on Wednesday.

The match takes place two days before the opening ceremony and effectively begins the Games for Team GB.

"It puts women's football out there, puts it on the map and hopefully will showcase the sport," Powell said.

"It's our first time as Team GB and you will be nervous, but I'm sure they will rise to the occasion."

Lots of people are looking up to you to inspire them

The match against the Football Ferns will be Team GB's first in the Olympic women's competition and Powell is aware there will be intense media interest in the fixture.

"It is the first event, which is fantastic for us - I hope it will be a real positive," added Powell, who is also coach of the England women's team.

"Hopefully, because there aren't other sports taking place that day, the media interest will be unprecedented."

Birmingham City forward Eniola Aluko, who started a warm-up fixture against Sweden last Friday, believes the timing of the match gives her team an opportunity to inspire a generation of talent.

"It's certainly an honour and a privilege," Aluko said.

"You feel special - you're one of 18 people chosen to represent the country and lots of people are looking up to you to inspire them and be a role model - so yes, honour is the word."

Powell's team are in Group E along with heavily fancied Brazil and relative unknowns Cameroon as well as New Zealand.

The first two in each group will definitely qualify for a quarter-final place, with two of the teams finishing third also claiming a place in the last eight.

But Powell is refusing to speculate on her team's prospects of winning a medal.

How they qualified: The Football Ferns beat Papua New Guinea 15-0 over two legs in the Oceania Women's Olympic Qualifier Final

One to watch: Amber Hearn

How they qualified: Beat Nigeria on penalties to become one of two teams qualifying from the CAF group along with South Africa.

One to watch: Francoise Josephine Bella

How they qualified: Won the Women's South American Tournament with a round to spare when beating Colombia 5-0

One to watch: Marta

"The success is that we are in it," she said. "We will try to get out of the group."

There are no age restrictions in the women's competition and 16 of the 18 players in the GB squad are English, with the other two coming from Scotland.

Many of Powell's squad played against New Zealand in last year's World Cup, a group match that England won 2-1 on their way to reaching the last eight, where they lost to France after a penalty shoot-out.

"I would expect New Zealand to be as tough as Sweden," said Powell. "We know that they are very fit and physical, and that they will run for 90 minutes."

Full-back Steph Houghton, who went close against Sweden with a powerful long-range strike, believes that there are weaknesses her team can exploit.

"We know what New Zealand are all about," said the Arsenal player.

"We know that they're going to be a really hard-working team, but we also know that if we get the ball down and pass it, then we could get three points. That's going to be the main focus."

GB will continue their campaign against Cameroon in Cardiff on Saturday before concluding the group stage of the competition against Brazil at Wembley three days later.