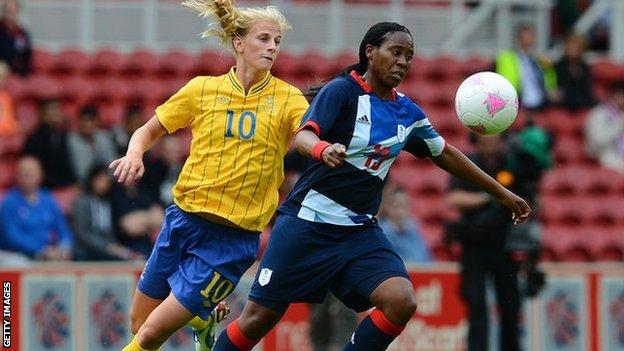 Iffy Dieke has put controversy over Scottish players in the Team GB football team behind her and is looking forward to facing New Zealand.

The Scottish FA had discouraged their players from taking part at the Olympics in London.

But defender Dieke and striker Kim Little are in Hope Powell's squad.

"I have a close network that have been great for me and a lot of people who have wished me well," the 31-year-old told BBC Scotland.

It is an unbelievable feeling and a unique opportunity

"It has been increadible support and it will be like that throughout the tournament."

The SFA, along with their Welsh and Northern Irish counterparts, had refused to participate in the Team GB football team process as they feared it could be used to threaten their standing in world football.

But, while there were no Scots (but five Welsh) named by men's coach Stuart Pearce, Dieke and Arsenal's Little were the only non-English players in the women's 18-strong squad.

Scotland's national body has confirmed there will be no repercussions for the pair accepting an invitation to play.

And Dieke, who plays her club football in Sweden with Vittsjo, has already contributed a man of the match performance in last week's 0-0 draw in a friendly with Sweden.

"It has not been too much of an adjustment," she told BBC Sport of adapting to playing with new team-mates.

"First and foremost, delighted with the clean sheet. You can't ask for more than that.

"I think we were unlucky not to put the ball in the back of the net a couple of times - we came very close."

Dieke, who was born in the United States but brought up in Scotland, thought they could take confidence from drawing with a team that finished third in the World Cup as Team GB prepare for their opening Group E game against the Kiwis.

"We didn't get the win and we just have to tweak a couple of things before the opening game on Wednesday," she said.

Dieke revealed that meeting previous Olympic medallists as part of the Team GB set-up had been inspiring.

"It is an unbelievable feeling and a unique opportunity," he said. "Coming into the village, you feel more part of it.

"You play to win and getting a medal would top everything that's happaned so far.

"One game at a time, but who wouldn't want to be on that podium?"