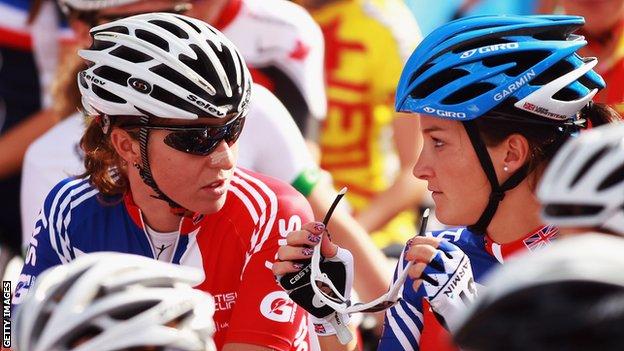 Welsh cyclist Nicole Cooke is in the UK for Sunday's Olympic road race with team orders likely to hinder her chances of another gold medal.

Cooke won the first of GB's gold medals at Beijing in 2008, but since then Lizzie Armitstead has taken over as team leader.

That means Cooke could have to sacrifice gold to Armitstead, with whom she has had differences in the past.

But Cooke said recently: "I know deep down what it takes to win races."

In an interview recorded for Wales at the Olympics, Cooke, who is now based in Switzerland, added: "I have proven through my experience and my results what I'm capable of."

Cooke and Armitstead's relationship was strained at the 2011 World Championships in Copenhagen.

They were in the same GB women's team, with Armitstead the leader.

The team looked well-placed to contend for the title until a crash late in the race separated Armitstead from Cooke up ahead.

They have differing recollections of subsequent events, which saw Cooke set off for the line only to finish fourth, with Armitstead coming home seventh.

Matters came to a head when Armitstead told Cycling Weekly magazine of a furious row once the team had crossed the line, adding: "I've never seen her [Nicole] work for a team-mate. It was a unanimous decision that Nicole didn't do her job properly."

But Cooke says that the pair have now smoothed over their differences ahead of the Olympic road race in London on 29 July.

"Lizzie and I have spoken about what happened in the race [2011 World Championships], what's happened since. I have forgiven for what she did and how she reacted," insisted Cooke.

"And I think in a way it did highlight why we were under-performing as a team.