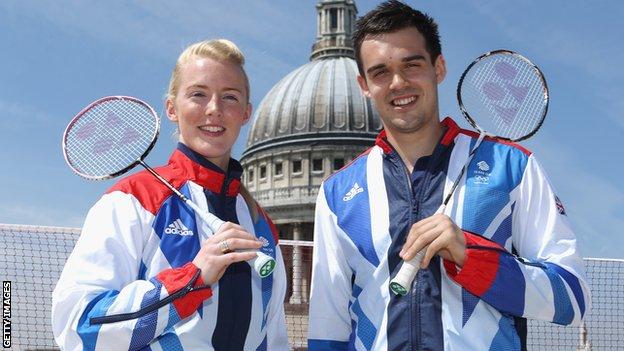 Team GB medal hopes Chris Adcock and Imogen Bankier have been drawn in the same group as the Chinese world champions in the mixed badminton doubles at London 2012.

They will face top seeds Zhang Nan and Zhao Yunlei, who beat them at the 2011 World Championships.

And the 15th seed will have to work hard to reach the last 16.

The draw may appear harsh for Adcock and Bankier, but the Anglo-Scottish pair have beaten their Group A Chinese rivals twice since the World Championships.

They begin their campaign against Alexandr Nikolaenko and Valeria Sorokina of Russia on Saturday morning before taking on Germany's Michael Fuchs and Birgit Michels 24 hours later.

Adcock and Bankier will then take on the Chinese duo on Tuesday, in their final Group A match with the top two pairs qualifying for the quarter-finals.

In the men's event Hurskainen reached the final of the European Championships in April while Cordon is ranked 29 in the world, and reached the quarter-finals of last year's World Championships.

In the women's event, Scotland's Susan Egelstaff was handed a difficult draw against 12th seed Sayaka Sato of Japan and Slovenian Maja Tvrdy in Group H.

Adcock and Bankier had been orginally duo to take on top seeds Zhang and Zhao in their first match, but the schedule was changed as Badminton World Federation (BWF) rules state that the top-ranked players must take on the bottom-ranked players first.

"As the International Olympic Committee required the application of this sequence when the group play was accepted in the Olympic Games regulations for the badminton competition, it was decided to revise the playing schedule accordingly," said the BWF in a statement.

"We apologise for the inconvenience caused by this change."