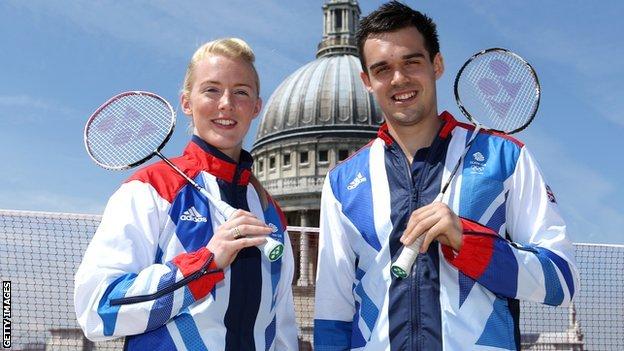 Imogen Bankier and partner Chris Adcock will meet the world number one pair at the group stage of the Olympic badminton mixed doubles tournament.

The duo have been drawn in Group A, where they will face China's Zhang Nan and Zhao Yunlei.

The two pairs met in the final 2011 World Championships, with Zhang Nan and Zhao Yunlei taking the title.

Egelstaff, ranked 38 in the world, must finish top of Group H to advance to the last 16 of the tournament.

Bankier and Adcock, who qualified for the Games ranked number 10 in the world, have beaten their Chinese rivals twice this year.

The other pairs in Group A are Alexandr Nikolaenko and Valeri Sorokina of Russia, who are ranked at 15 in the world, and Michael Fuchs and Birgit Michels of Germany, ranked world number 22.

The top two pairs from each of the four groups qualify for the quarter-finals.