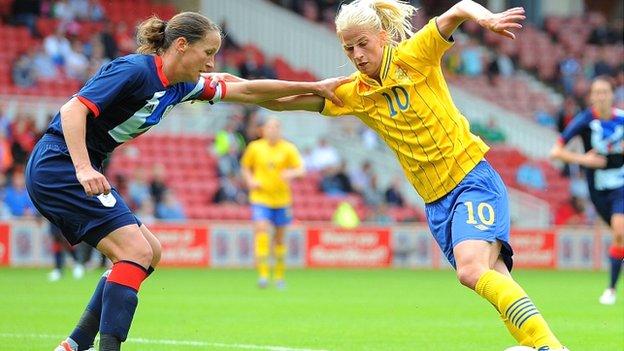 Casey Stoney is the perfect choice to captain Team GB's women's football team and can help the side win gold at London 2012, according to her club manager Glen Harris.

Harris told BBC Sport: "Casey is a natural leader and an inspiration and I really think they [Team GB] can do it.

"The draw is decent and they are pretty confident they can go all the way."

Casey is a great organiser and communicator. She reads the game brilliantly and that is probably her biggest asset. She understands the game and is able to translate that to others around her

Team GB's 0-0 draw against Sweden in their final warm-up fixture at Middlesbrough's Riverside Stadium last Friday was not the ideal result heading into Wednesday's game at Cardiff's Millennium Stadium.

But Harris said: "It's a very good England side with a couple of decent Scots girls and they can make a massive difference."

Stoney, 30, not only skippers the Lady Imps but is the England captain as well, so it was no surprise that the commanding defender was selected by her national manager, Hope Powell, to lead the GB side.

She told BBC Lincolnshire that being made captain for the Team GB squad would be the "pinnacle of her career".

And Harris feels there could have been no better choice.

"She is an inspiration on and off the pitch," he said. "She's a good reader of the game and, from a manager's perspective, having someone like her on the pitch as the game is unfolding is a real benefit.

"Casey is a great organiser and communicator. That is a real strength of hers. She reads the game brilliantly and that is probably her biggest asset. She understands the game and is able to translate that to others around her.

"She is respected by all team-mates at Lincoln and at international level. It's a great honour to represent your country, but to be named as captain is an even bigger honour and a fantastic achievement."

Stoney was named England women's captain in 2012, a year after joining Lincoln

Harris says that Stoney's desire and drive is a huge reason behind a successful career that has seen her shine for Arsenal, Chelsea, Charlton and now Lincoln in domestic football and win more than 100 caps for England.

But it can also create problems.

Harris added: "At times, she's a nightmare because she can be her own worst enemy. She is always analysing the game and analysing her own game - sometimes too much.

London 2012 is the first time Great Britain have competed in the Olympic women's football tournament.

Team GB continue their campaign against Cameroon in Cardiff on Saturday before concluding the group stage of the competition against Brazil at Wembley three days later.

The first two in each group qualify for a quarter-final place, with two of the teams finishing third also claiming a place in the last eight.