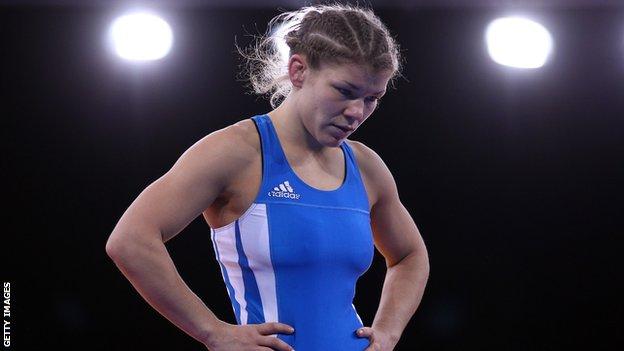 Great Britain's only wrestler at London 2012, Olga Butkevych, is hoping to improve the popularity of the sport by winning a medal at the Olympics.

Ukraine-born Butkevych, 26, was granted a British passport in May and is the sole GB representative after the sport failed to meet selection criteria.

"If I get a medal I hope I can make wrestling more popular," she told BBC Radio Manchester.

"In England it is not a popular sport so in the future I hope it can change."

She added: "[In Ukraine] we have more schools and professional coaches and I think that is the problem in the UK."

Butkevych, who trains in Manchester, was among a group of Eastern European athletes brought over to train with the GB squad in 2007, but after five years living and competing was eligible to apply for a passport.

Team GB chief Andy Hunt defended her selection, and that of other so called "plastic Brits", by saying he was satisfied she met the criteria as it allowed the country to have a representative at the games.

Although used to wrestling in the -59kg category Butkevych will wrestle in the -55kg division at the Olympics in the same arena where she won silver in a test event at London's ExCel Centre last year.

"I'm doing the same job, everything is the same, I'm just representing Great Britain," she added.

"I'm starting to get a little nervous but I hope everything will be fine because everything happens so soon."