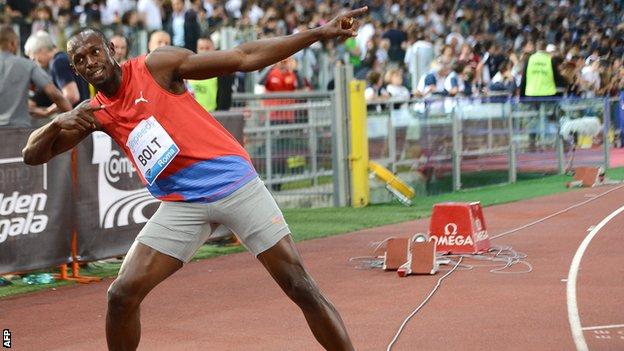 Usain Bolt and Yohan Blake are both "fit and raring to go" at the Olympics, says Jamaica track team doctor Winston Dawes.

He has shrugged off suggestions Bolt will miss the Games with injury and promised "something fantastic" from the sprint pair.

Reigning 100m and 200m champion Bolt is understood to have been suffering with niggling leg and back problems.

But Dawes said: "Both of them are at the top of their game."

He told BBC Sport's Leon Mann: "If the conditions are ideal, then we are going to see something fantastic. We may see records go."

Bolt holds the 100m record of 9.58secs and 200m world best of 19.19 but Blake beat him at the Jamaican trials in both distances less than four weeks ago.

Bolt, who suffers from scoliosis, a condition in which the spine is curved from side to side, will be in full health when the 100m preliminaries commence on 4 August.

"He's back fully," said the doctor. "He has been training very, very hard and his performance is on track. We expect he'll be fully fit by the time the Olympics come around.

"He had some slight cramps [in his legs]. He had had an accident before, so that might have shaken him up a little."

Bolt and Blake will be up against compatriot and former world record holder Asafa Powell along with American pair Tyson Gay and Justin Gatlin in the showpiece 100m event.

But Dawes is confident that friends and training partners Bolt and Blake will produce something special.