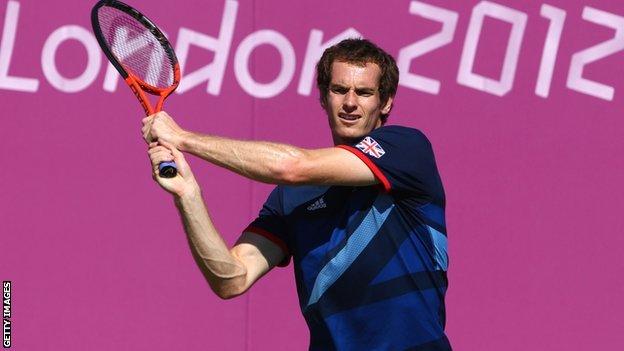 Andy Murray has been handed a tough draw as he bids to win Olympic singles gold at London 2012.

The Scot plays Stanislas Wawrinka, a gold medallist in the doubles in Beijing 2008, in round one.

Murray could then face Richard Gasquet, Tomas Berdych and Novak Djokovic before a possible final against Roger Federer.

Britain also have four pairs in the doubles event.

Murray and his brother Jamie team up against Austria's Jurgen Melzer and Alexander Peya, while Colin Fleming and Ross Hutchins face Julien Benneteau and Richard Gasquet of France.

But it is Andy Murray's singles draw that drew most attention.

The 25-year-old has won six of his 10 encounters with Switzerland's Wawrinka, including a five-set epic under the Centre Court roof in their only previous match on grass in 2009.

Wawrinka won doubles gold with Federer in Beijing four years ago and will be a dangerous opponent.

Should he negotiate his opener, Murray will play Somdev Devvarman or Jarkko Nieminen in the second round and could face Frenchman Gasquet in round three.

Murray and Gasquet have twice met in the last 16 at Wimbledon, Murray winning on both occasions including a memorable five-setter in 2008.

A quarter-final against Berdych would be another stern test, the big-hitting Czech having reached the 2010 Wimbledon final and beaten Murray on four of their six meetings in the past.

Second seed Djokovic won bronze in Beijing and leads the head-to-head with Murray 8-5, while world number one Federer has beaten the British number one in three Grand Slam finals, most recently at this year's Wimbledon Championships.

British number two Keothavong has the hardest draw of Team GB's female trio in singles action, with Wozniacki of Denmark a former world number one.

Watson will see Spain's Soler Espinosa, a clay-court specialist, as a beatable opponent, as will Baltacha against Szavay of Hungary.