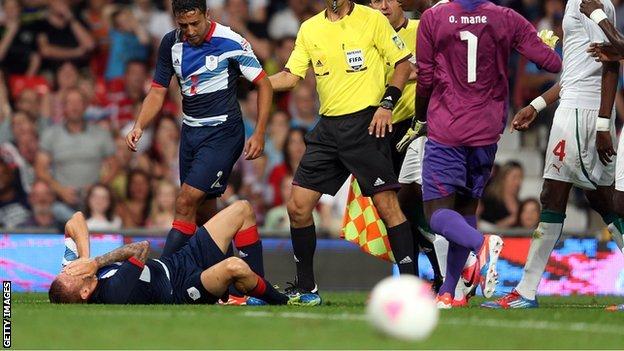 Great Britain full-back Neil Taylor was furious with a tackle on Wales team-mate Craig Bellamy during their opening 1-1 draw with Senegal at Old Trafford.

Striker Bellamy had already given GB's Olympic campaign the perfect start with a curled goal before he was clattered in the area by Saliou Ciss.

"It's a definite penalty; he could have broke his leg, I'm sure everyone could have seen that on TV," Taylor said.

"That's why I was angry, you can end someone's career in a flash like that."

Taylor was himself the victim of a late first-half tackle and his anger at the challenge on Bellamy saw the Swansea player involved in a brief spate of pushing and shoving with Senegal's Everton forward Magaye Gueye.

Three Senegal players were shown a yellow card, and one GB player, but Taylor believes the match officials were too lenient.

"I've got to be honest I've never seen refereeing like it, in the Premier League we're looking at at least four players sent off," Taylor added.

"But we've conceded a goal and... at 1-0 that's always liable to happen. We were the better team but we have to learn to close the game down.

"We're disappointed... at the moment it's hard to take."

Fellow Swansea and Wales player Joe Allen, who refused to comment on Liverpool's bid to sign him, started in midfield for GB but had been wrongly identified as being English in the match programme.

However, Allen laughed off the mistake and said he was confident that the knock to his knee that forced him off after 63 minutes was not serious and hoped to be involved in Sunday's game at Wembley against United Arab Emirates.

"I'm sure that caused a bit of a storm today, I did hear a little whisper about that - we'll have to make sure they correct that for the next game!" Allen said.

"We'll have to wait and see through the night and tomorrow morning now and see if [the knee] settles down... I don't feel it's anything serious, I just took a precaution coming off and it gives me a chance now to get fit for the next game."