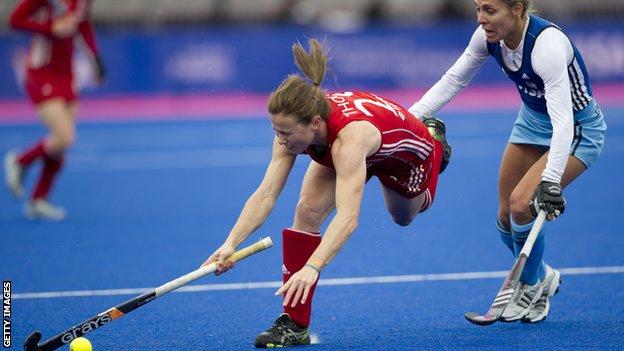 The 31-year-old forward is the only Welsh member of Great Britain's hockey squad, who begin their campaign against Japan on Sunday.

Before that, Thomas and her team-mates will attend Friday's opening ceremony.

"Personally I get a lot of energy from going to the opening ceremony. It gives me a buzz," she said.

"We heard the rehearsals and the fireworks display so it's going to be quite exciting to actually be inside the stadium itself on Friday.

"It's going to be amazing walking out in a home nations opening ceremony at the Olympics.

"From previous experiences in the Commonwealth Games in Delhi and also the Beijing Olympic Games it actually gives me a lot of energy as a player," said Merthyr Tydfil-born Thomas.

"You'll get a lot of insight into how the Games is going to be and how amazing it's going to be.

"Beijing was wonderful but obviously the London Olympics are going to be much, much better.

"The stadium for us is going to be full every single game - 16,000 people there supporting us."

Ahead of their opening game on Sunday, Thomas and team-mates have been staying at the athletes' village.

And as the build-up intensifies and more competitors arrive, the Wales hockey captain says she will not be starstruck by the big sporting names.

"The biggest one we've seen so far is Andy Murray. We saw him last week," Thomas said.

"To be honest quite a lot of athletes still aren't in the village yet. They're away playing or in holding camps.

"The GB men's basketball team moved in next door to us and they seem like a nice group of boys. That was quite exciting.

"I've not seen any big, big stars yet but hopefully we'll just go about our games and be focused on what we're doing."

Great Britain's women's hockey team are ranked fourth in the world rankings and are in Pool A along with 2008 gold medallists the Netherlands, China, South Korea, Japan and Belgium.

After securing silver at the Champions Trophy in Argentina in February and winning May's Olympic test event, Thomas says Britain are targeting gold.

"We've worked hard as a team to get where we're at physically and also to improve technically and tactically," Thomas added.

"I think we've done that in all elements and [we're] looking forward to these games.

"It's very exciting for us because finally it's about to begin and finally we're about to put in to the games what we've done in practice day in, day out.""

Hear more from Sarah Thomas on BBC Radio Wales' The Back Page, presented from the Olympics in London on Saturday, July 28 at 08:30 BST.