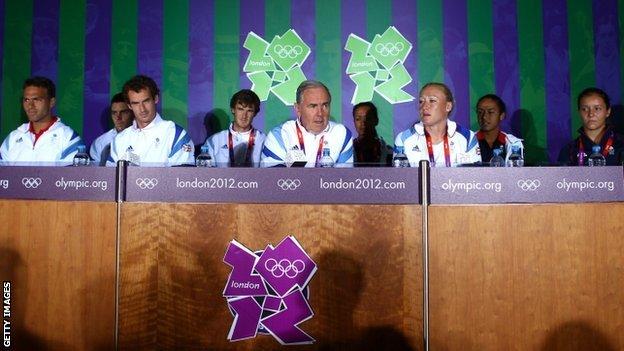 Britain's Olympic tennis team have been told they are not permitted to attend the London 2012 opening ceremony.

The eight-strong squad, some of whom planned to take part, were informed of the decision by email on Friday.

A British Olympic Association spokesman told BBC Sport: "It is a choice made by each sport team leader together with the athletes.

"While the ceremonies are a significant occasion, performance comes first for Team GB's athletes."

Tennis team leader Paul Hutchins told the players in writing that none of them would be present at the event.

Murray and Watson begin their singles campaigns on Sunday.

The opening ceremony starts at 21:00 BST and will finish after midnight.

Baltacha backed the decision: "We're here to compete. It would have been really nice to go but we're here for a reason and that has to come first. If we were to go we wouldn't be back until late and that's not the best preparation."

Athletes will be transported to a holding area where they can sit or stand while waiting to join a 90-minute parade inside the Olympic Stadium.

However, all of them play their opening matches on Sunday.

The BOA discussed the issue at length and agreed that athletes competing in the first 72 hours of the Games should prioritise performance.

A final decision is made by each sport following consultation between the team leader, coaches and athletes.

BOA chief executive Andy Hunt said that around half of the 541 athletes attending the ceremony would be a "reasonable" outcome.

None of the swimming or athletics squads will be there, while members of the eventing, sailing and road race cycling teams are also set to miss out.

Others, such as triathlete Alistair Brownlee, will be training in other parts of the country and overseas.