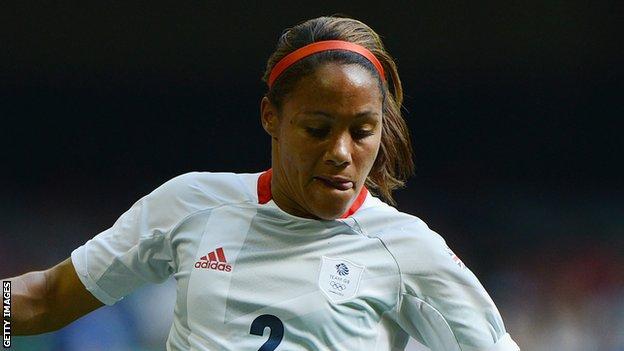 Great Britain defender Alex Scott says securing qualification for the last eight is the priority when they face Cameroon in their second group game.

Team GB opened their campaign with a 1-0 win over New Zealand on Wednesday.

The Arsenal right-back told BBC London 94.9: "We're looking at what areas we need to improve on.

"Our main aim is to get of the group and then we'll set new targets. We know getting the win on Saturday is going to put us on the right path."

She added: "This team and this squad is good enough to get a podium finish. That's what we're all dreaming and hoping we can achieve.

"For women's football, to leave that lasting legacy would be a great thing."

GB coach Hope Powell said that her players had made history by beating New Zealand in their opening match, and Scott says the atmosphere at the Millennium Stadium was one to behold.

"We knew there was pressure on us.

"The first 10 minutes, we knew we were not really playing to our capabilities but the hairs on my arms started to stand up because the crowd was right behind us.

"As a kid, I never dreamt of being an Olympian but I'm honoured to be a part of it now."