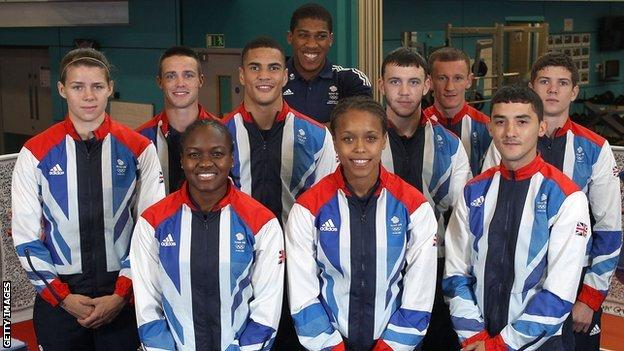 World silver-medallist Joshua will meet Savon on Wednesday in the last 16.

Nicola Adams and Savannah Marshall are just one win from a medal after receiving byes to the quarter-finals.

Adams will face either Stoyka Petrova of Bulgaria or New Zealand's Siona Fernandes in the last eight, while Marshall awaits the winner of the bout between Kazakhstan's Marina Volnova and Kenya's Elizabeth Andiego.

Flyweight Andrew Selby has received a bye to the last 16 where he will meet either Kazakhstan's Ilayan Suleimenov or Sweden's Salamo Ntuve.

Bantamweight Luke Campbell will meet Italian Jahyn Parrinello or Namibian Jonas Matheus in the last 16, while Josh Taylor was handed a tough draw against Brazilian Robson Conceicao in the last 32, with former world champion Domenico Valentino from Italy awaiting the victor.

Great Britain boxing captain Thomas Stalker has received a bye to the last 16 of the light-welterweight division, where he could face Indian Manoj Kumar or Turkmenistan's Serdar Hudayberdiyev, while welterweight Fred Evans faces Algerian Ilyas Abbadi in the first round.

However, there is no doubting Joshua's meeting with former youth world champion Savon is the pick of the draw for Great Britain.

Medzhidov went on to beat Joshua by a single point in the decider in Baku, but the London boxer cannot meet his conqueror until the Olympic final at the earliest as the Azeri is in the opposite side of the draw along with reigning Olympic champion Roberto Cammarelle.

Middleweight Darren O'Neill is also in action on Saturday in the first round against Nigerian Muideen Akanji, while welterweight Adam Nolan faces Ecuador's Estacio Sanchez on Sunday.