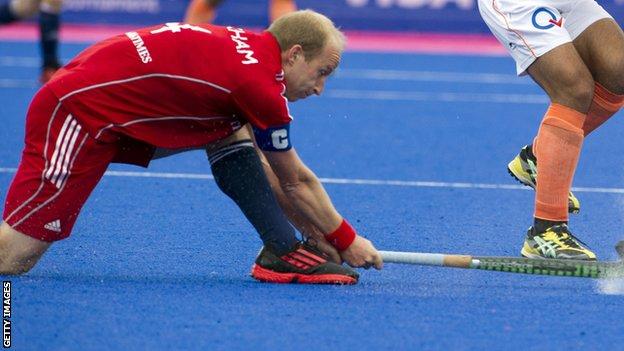 Captain Glenn Kirkham has urged his Great Britain team to make a statement of intent in their opening group game against Argentina on Monday.

Only the top two will progress to the semi-finals and with the top-ranked Australians also in the group, the home side cannot afford to slip up.

"Argentina are definitely one of the team we have to be wary of," Kirkham, 29, told BBC Radio Cambridgeshire.

"We know their style of play but not a huge amount about certain individuals."

Great Britain lost 3-2 to Argentina in Malaysia two months ago, a performance described as "appalling" by coach Jason Lee.

And Kirkham acknowledged that they cannot afford a repeat at the Riverbank Arena.

"Australia are in the group as number one, the Spanish are really close to us in the world rankings and then the rest - Argentina, Pakistan and South Africa - are certainly teams that can beat anybody on their day," he said.

The Cambridge schoolteacher is one of four members of the GB squad to have made over 200 international appearances.

And he is hoping to crown his career with an Olympic medal, having been part of the team which finished fifth in Beijing four years ago.

"Australia have, over the last two or three years, pretty much won every tournament going and they are definitely resounding favourites," Kirkham said.

"In the other group, there is Germany and Holland, who are two and three, and then ourselves at four and it would be nice to think that we can carry our world ranking and make it to the semi-finals.

"But the Spanish are always a tough game for us - there really isn't a great amount between us - and teams like South Africa have been improving recently.

"In an Olympic year, the focus is so high, the drive is so high, so many of the teams improve.

"We go into it with confidence that we've been doing well over the last few years, being in medal matches, being in semi-finals, and look forward to it in that sense but knowing there really isn't any easy game in this tournament."