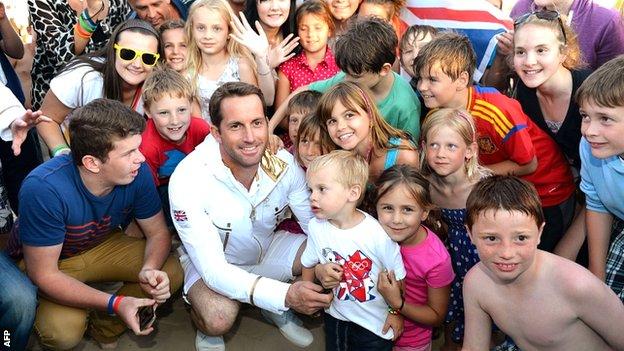 Down on the beach, Ben Ainslie is mobbed.

In his Team GB-issue white tracksuit with gold collar and trim, he is British sailing's Elvis.

In the honey-light of Friday evening, a huge crowd loll on the Weymouth sand in front of the stage.

Sunshine, music, and a festival vibe - it could easily pass as Rio. But the backdrop and the promise of the London 2012 opening ceremony on the huge screens make for a quintessential British beach party to see in the Games.

Ainslie, who will compete in the men's Finn class, is interviewed beside the stage. Beachgoers spot the three-time gold medallist and dash over to get a snap.

Up on the stage now, BBC Sport's Rob Walker introduces the British sailing team, saving Ainslie for last. The build-up is spine-tingling.

How Ainslie keeps his feet on the ground is anyone's guess. 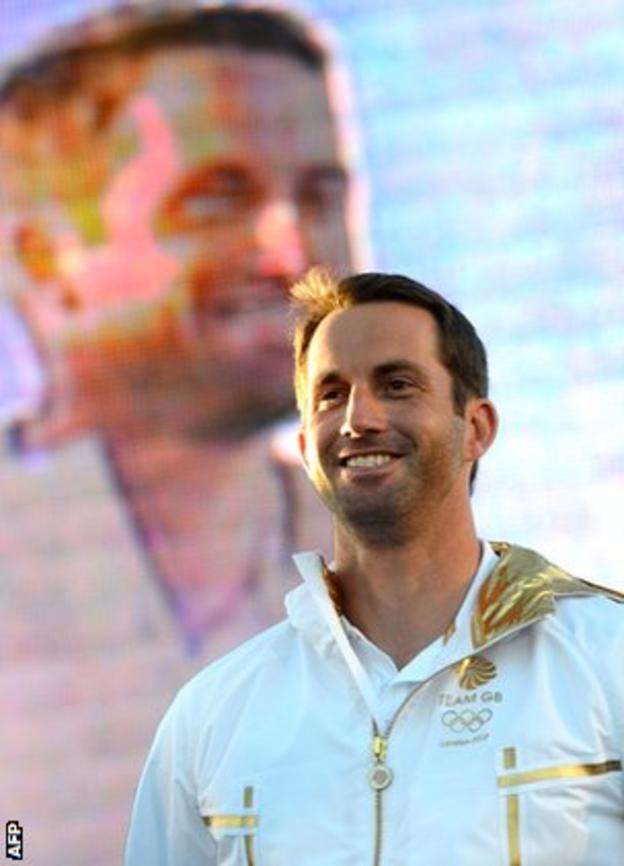 In more formal settings he talks only of pressure coming from within. But here, in front of this crowd, he acknowledges the responsibility to deliver and thanks them for their support.

Ainslie is the only one most people have heard of, but GB sailing boss Stephen Park says Britain has realistic medal chances in all 10 classes, though he stresses that is highly unlikely.

The British team is just 16 among 380 sailors from 63 countries, but it is aiming to top the medal table for a fourth straight Games.

Other nations have closed the gap, though, and the Australians are favourites in at least three classes.

Park, sailing's equivalent of cycling chief Dave Brailsford, tweeted a picture on Thursday night of a crimson sunset over Chesil Beach. "Calm, before the greatest show on earth," he wrote.

It was a poignant and personal gesture from a man more given to dealing in the stark, measured language of high-performance sport.

"Our sport takes place in a very beautiful part of the world and first thing in the morning and last thing at night it is just taking in the surroundings and recognising that over the next couple of weeks this is going to be the venue, these are going to be the waters, the Jurassic Coast is going to be the background for what will hopefully be one of our best ever British performances," he said.

The sailing base is the Weymouth and Portland National Sailing Academy, on land that was once the Portland naval base.

It sits at the far end of the huge 29km long pebble barrier of Chesil Beach that keeps the English Channel at bay and at this end links Weymouth to Portland, which hangs off the end like a tear.

The vast, concrete dinghy park is dotted with Olympic class boats of various sizes, all in identical Games livery, save for the three-letter country abbreviation on the bow and sail, and the sailors' names and national flag also on the sail.

A quiet air of industry and anticipation hangs in the summer breeze.

With only one boat per class per nation the number of competitors is the smallest of all regattas.

But the smell of salt and the clink, clink, clink of halyards slapping on masts makes it indistinguishable from boat parks and marinas the world over.

Another Games giveaway is the pink signage and the highly regulated press walkways and interview pens. No wandering among the boats at the Olympics.

Looking inland, the backcloth is the rolling green hills and cliffs of Dorset's Jurassic Coast but, from the boat park, there is no view of the five different race courses.

There is the flat water Portland Harbour course inside the breakwater; three areas exposed to stronger winds and tide out in Weymouth Bay; and the "Nothe" course in front of the first ever ticketed spectator area by Nothe Fort, hosting 5,000 paying punters with a big screen, commentary and catering.

There are plenty of vantage points - try the Rodwell Trail, Sandsfoot Castle or the harbour breakwater - for free close-up views of the Harbour or Nothe sailing areas. A mobile device, BBC Sport's digital coverage for the commentary and you're away. 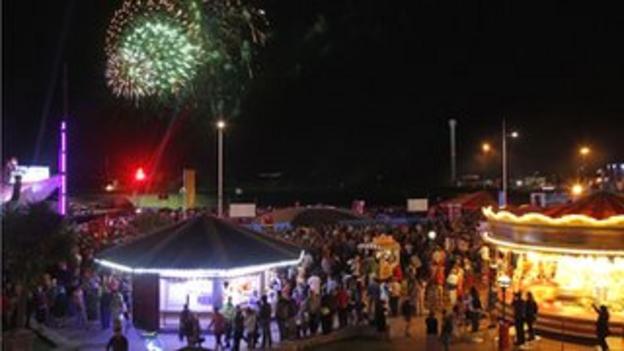 Water-based spectators are kept at a safe distance by an exclusion zone of white buoys, with police and Royal Marines in fast boats and jet-skis patrolling the perimeter, and HMS Bulwark standing guard at the mouth of the Bay.

Over in Weymouth, a British seaside town goes about its summer business. Pensioners stroll, families on bucket and spade holidays frolic on the beach and in the sea. Amusement arcades entice with their flashing lights. Fishing boats, yachts and pleasure craft slip in and out of the picturesque old harbour.

In the evening the pubs, restaurants and bars beside the water hum with the excitement - of the Games and the long-awaited sunshine of an English summer.

Weymouth has not been immune to the usual gripes that come with an event as big as the Games.

Some businesses report takings down and hotels claim many repeat customers - the mainstay of Weymouth's summer economy - have stayed away this year. Traffic and road closures are other moans but the two-week inconvenience can be offset by the legacy of a much-needed new A354 to Dorchester.

Back at the beach party, as the sun sets behind the hotels on the Esplanade, Walker has Ainslie and co lined up at the front of the stage and is working up to a fever pitch.

"This is one of the greatest British sailing teams of all time," he says. "They are your team. They are living in your town and they are carrying the hopes and dreams of an entire nation. Cheer them on their way, ladies and gentlemen. We are in the presence of greatness."

The crowd are on their feet on the sand, hooting and cheering. As pep rallies go, it is right up there. Rio can wait. The Games in Weymouth are go.