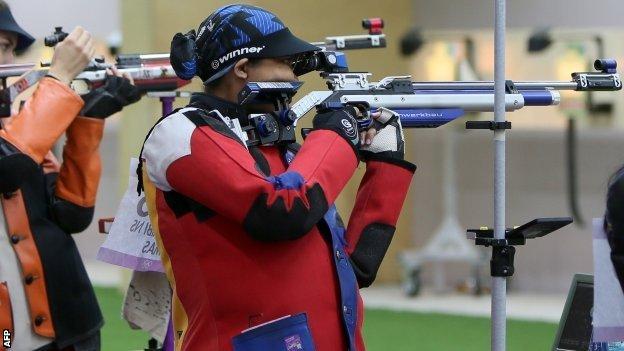 Suryani, who is 33 weeks pregnant, finished in 34th position out of 56 competitors.

The 29-year-old, who is due to give birth on 13 September, said she felt four kicks during the competition but it did not put her off.

"When she kicks I breathe in and out and then continue," she said.

When asked what she said to her daughter, who will be named Dayana Widyan, she said: "Behave yourself, be calm, don't move so much. She always listened to me. Lucky."

Suryani, who won a shooting gold at the 2010 Commonwealth Games and needed special permission to fly to London for the Games because she is so heavily pregnant, will be returning to Malaysia on 31 July.

However, she described competing at the Royal Artillery Barracks as a dream come true and said she would carry on shooting after the birth.

"I will still carry on because this is already my life," she said. "What I've heard is that a mother after delivery has fresh blood so they can perform better, I believe. That's the luck of being a woman."

And she said perhaps her daughter could follow her into a sporting career.

"My blood is like hers. Maybe she's better than me," she said.

When Suryani was asked about what would have happened if she had gone into labour during the competition, she said: "I just prayed that I could get to a labour room. I would accept it with an open heart. I am not a normal mummy doing everything slowly."