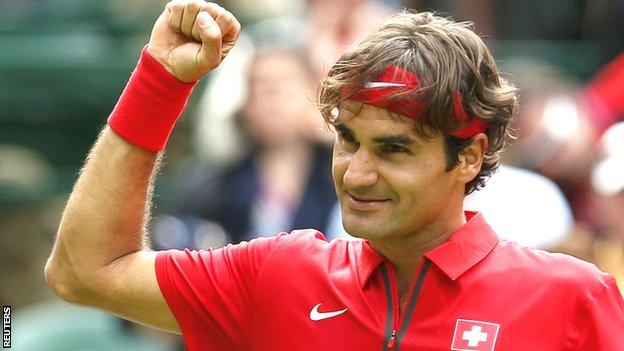 Roger Federer and Serena Williams both started their Olympic singles campaigns with victories, although Federer was made to work harder than expected.

The Swiss world number one was given a stern test by Colombian Alejandro Falla - who almost stunned him at Wimbledon in 2010 - before winning 6-3 5-7 6-3.

"Terrific first-round performance by Serena. She served well, I was impressed with her return of serve and she was full of confidence. Why can't she win gold? She loves Centre Court, she is right on target and has already sent a message to the rest of her opponents. It was total domination."

Belgium's Kim Clijsters, set to retire at the end of the season, overcame Roberta Vinci of Italy 6-1 6-4.

Clijsters next plays Spaniard Carla Suarez Navarro, while Williams will take on Urszula Radwanska of Poland.

"I was a little nervous in the first set," said 14-time Grand Slam winner Williams, back at the scene of her recent Wimbledon triumph.

"Once I got relaxed, I played a little better. I think I played solid. I felt the ball well. I missed a few shots, but at least I was going forward.

"I think the grass is a wee bit slippery. But you've just got to deal with it, so I'll make sure I'm really stretched out before I go out for my next round, get ready to slip and slide, whatever it takes."

Awaiting Federer in the second round is Frenchman Julien Benneteau, a player he needed five sets to beat en route to the Wimbledon title.

"It's a huge deal," said Federer about the prospect of winning his first Olympic singles gold medal. "It would be a massive highlight of my life.

"I remember the emotions I had winning the gold with my Stan [Wawrinka, in the doubles at Beijing 2008].

"It's already the fourth Olympics for me so I will give it all I have."

Berdych was a potential quarter-final opponent for Britain's Andy Murray, who faces Stanislas Wawrinka on Sunday.