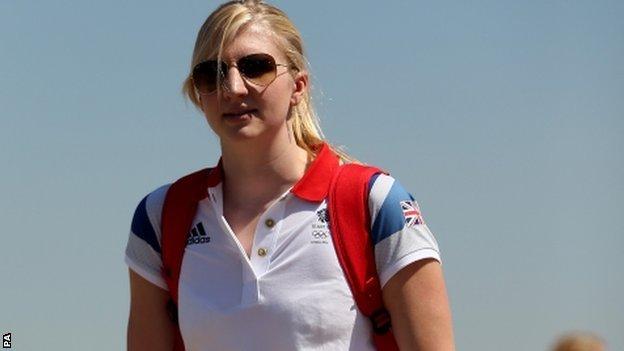 Can Rebecca Adlington open her London campaign in style by successfully defending the first of her two Olympic titles at the Aquatic Centre?

Here are Sunday's events to watch out for (all times BST):

Adlington broke new ground for British swimming when she won two gold medals in Beijing, and she defends both the 400m and 800m freestyle titles in London.

Read up on the protagonists:

First up is the tougher of the two for Adlington, the 400m, in which she is expected to face a strong challenge from the likes of Italy's Federica Pellegrini, France's Camille Muffat and American Allison Schmitt.

Defending Olympic champion Nicole Cooke won Britain's first gold medal of the Games in Beijing but has had to battle with Lizzie Armitstead for supremacy in the British team heading to London.

Ben Ainslie is another Briton opening his title defence on Sunday, the first day of action at Weymouth and Portland, and the nation's most successful sailor also begins his quest for a fourth Olympic gold medal. Sunday will see him take part in the opening two races in a series of 10, building up to the medal race on 5 August.

Coach Stuart Pearce will hope that Wembley can provide the necessary inspiration for Great Britain's men when they face United Arab Emirates, with improvement required on their opening draw against Senegal.

Andy Murray came so close to victory at Wimbledon earlier in July and, after defeat in the doubles with his brother Jamie on Saturday, his remaining Olympic hopes now rest on this match. This week he told BBC Sport he is confident he can win the Olympic singles title, saying: "If I play like I did at Wimbledon, I won't be far off."

Beth Tweddle will retire at the age of 27 at the end of the Games, her third Olympics and one she was convinced of participating in despite doubts four years ago. "After 2008 I wasn't even sure I would carry on, but the huge support for London and the enthusiasm of the public has really motivated me and inspired me to carry on training hard," she said.

Zara Phillips has an early start to the day in the dressage, while there is afternoon action for Tim Cook and William Fox-Pitt, who is competing in his fourth Olympic Games.

Alison Williamson,in her sixth Olympic Games, leads a three-woman team in their bid for medal glory at Lord's. Naomi Folkard and Amy Oliver complete Great Britain's trio of representatives as they attempt to end a dominance of the event by South Korea, who have won gold at every Games since the sport was added to the Olympics in 1988.

The United States basketball team is the most decorated in Olympic basketball and, famously, once went by the moniker "the Dream Team" for its massed ranks of stars. Are those stars fading? Some think so. They begin against France on Sunday, with Brooklyn Nets star Deron Williams telling reporters: "We expect to win gold. Nobody comes to the Olympics to lose."