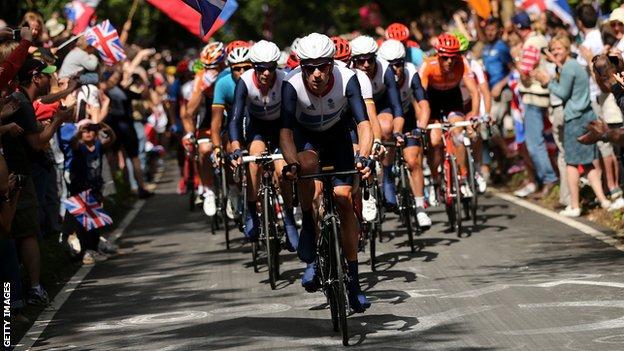 Being at an Olympics can sometimes feel like the best house party in the world: even as you're having an absolute blast, there's always a nagging sense that something even better might be happening in another room just down the hall.

Saturday was the first full day of competition at the London Games, which meant the city and its surrounds were alive with diverse sports for the first time - boxing and table tennis at the ExCel Centre and beach volleyball on Horse Guards Parade; tennis at Wimbledon; dressage in Greenwich and gymnastics at the North Greenwich Arena; rowing at Eton Dorney and archery on the rich Lord's outfield.

That's a sporting smorgasbord rich enough for any palette, but the most significant moments were somewhere else again: the first gold medal of the 2012 Olympics on offer in Woolwich, Great Britain's first big chance in a city-spanning road race finishing within royal sight on The Mall, and the first superstar clash - Lochte-Phelps - back in Stratford itself.

The women's 10m air rifle competition may not ordinarily top your list of must-see Olympic events. Which is a shame, because - as with many of the undercard sports - it has the combination of drama, simplicity and atmosphere to please any sporting dabbler.

Out east at the Royal Artillery Barracks, the packed stands and media tribunes were unseemingly rowdy early in the morning.

Pre-competition favourite Yi Siling was trailing Poland's Sylwia Bogacka going into the eighth round of 10, and the red-shirted coaches and supporters were commensurably twitchy.

It was a reverse of the usual sporting theatre: on the stage, eight motionless figures; in the stands, constant movement.

Every two minutes there would be a series of gentle reports, like twigs being snapped in the distance, and then roars as the shooters' scores appeared on the giant screens up above.

The stadium commentator revelled in his role in the spectacle. The woman with the best score in each round would be announced like a WWE wrestler, third-placed Dan Yu pronounced with hammy drama as "Oooh…"

It was breathless stuff, for the shooters quite literally. Not even trigger-fingers seemed to move as the targets were pierced.

With gold in her grasp, Bogacka suddenly cracked. Her penultimate shot was wayward; Yi edged back in front, and with monkish concentration held firm in the final round to put China atop the medal table for probably the duration of the Games.

We were under way. Meanwhile, Mark Cavendish and his team-mates were completing their second ascent of the zig-zag road up Box Hill in Surrey.

"The British team were a victim of their own success. The same tactics worked at the World Championships [where Cavendish won gold]. Then, in the Tour de France, Cavendish battered them on the Champs Elysees in Paris. There were eight riders helping in Copenhagen, just four today. While four people can influence a race, they cannot control it. The problem is nobody wanted to ride against Cavendish on the Mall because they knew they would come second. The team did everything they could, other riders did not contribute to the race and they missed out too. Andre Greipel is the second best sprinter in the world but he and his German team sat back."

This was unmistakably the British story of the day - followed in the flesh by an estimated crowd of one million on the 250km route, and 20,000 aficionados around that climb and descent alone.

The noise out at Eton Dorney for the rowing heats had been fantastic, the reception for Britain's gymnasts in Greenwich an ear-splitter. But this was something else - an army of campers, a peloton of early-morning riders and, every mile of the route, people who had never watched any form of cycling before.

It was the sort of support that will go a long way to making these Games a success. In Beijing there was barely anyone at the finish up at the Great Wall, let alone along the route. Through Fulham, Putney, Richmond Park and on over Kingston Bridge and out past Hampton Court Palace they were three or four deep by the roadside.

At the finish line on The Mall there were nerves and anxious glances at television screens as each attack went away off the front.

Cavendish's four compadres - Bradley Wiggins, Chris Froome, David Millar and Ian Stannard - did a wonderful job of regulating the race for their sprinter until the dash back into town was almost under way, but it was like trying to tame a bucketload of snakes.

Fearful of Cav's reputation, no other nation wanted to assist any chase. Which meant that when a group of 22 established a lead of just under a minute with less than 16km to go, British legs were empty. Within sight of Buckingham Palace, their families and expectant fans fell ominously quiet.

Talk of Cavendish as a red-hot favourite for gold had always been a little wayward. A team of five cannot control a race that long as the British team of nine did when the Manxman took World Championship gold in Copenhagen.

Sure enough, he finished buried back in the chase group, 28 places down on new champion Alexandre Vinokourov, and what might have been one of the iconic moments for the host nation slipped quietly away into the warm afternoon air.

Back across the city to the east, you wondered if Ryan Lochte's dual with Michael Phelps might be the party room all had been searching for.

It was dramatic, all right, but not quite as anyone had imagined.

"That was a fantastic race. Lochte went for it from the beginning and dominated all the strokes. To have Lochte take 0.2secs off Phelps on the butterfly meant it was only going to go one way on the backstroke."

Lochte's superiority was so absolute that the 400m medley gold was his with a quarter of the race still to be swum. Phelps, the greatest swimmer of his era, the man with an astonishing 14 Olympic gold medals to his name, was barely even nowhere - fourth, off the podium, over four seconds down on his extravagant rival.

It was almost a little anti-climactic, even as you marvelled at Lochte's speed and technique: not so much a duel in the pool as a thrashing in the splashing.

There was one room left to try.

Britain's Hannah Miley went into her 400m medley final as a genuine hope for Britain's first medal of the Games, if not that precious gold; she finished it down in fifth, needled by the knowledge that a bronze would have been hers had she matched her season's best.

But that's the Olympics. You're never quite sure where the big stories will come; you just hope you're standing within earshot when they do.