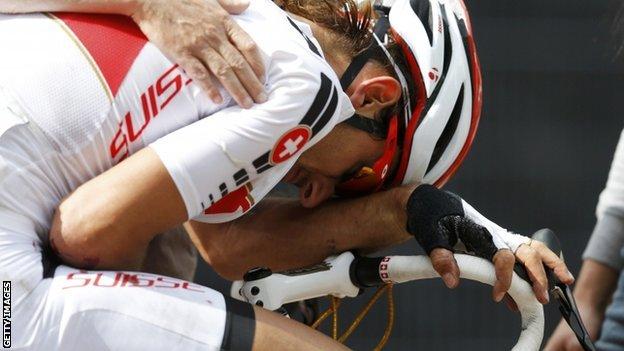 Swiss cyclist Fabian Cancellara is set to defend his Olympic time trial title on Wednesday despite a crash late in Saturday's road race.

Cancellara was leading a breakaway when he missed a right-hand turn and crashed into the safety barriers.

The 32-year-old finished the race in 106th place but had cuts and grazes from the incident.

I feel better with every hour passing. The pain is still there, but I am in good hands. I am a hard man

The Swiss Olympic Association confirmed the four-time world champion would be at the start at Hampton Court Palace.

He will be challenged by a field including the likes of Britain's Tour de France winner Bradley Wiggins and reigning world champion Tony Martin of Germany.

Cancellara, who broke his right collarbone at the Tour of Flanders in April, finished Saturday's race, which was won by Kazakhstan's Alexandre Vinokourov, but was holding up his right arm afterwards.

"I am an optimist and now I hope the training today will show if the position on the time-trial bike suits me and if I can go forward," he said on Monday.

"I feel better with every hour passing. The pain is still there, but I am in good hands. I am a hard man. I've had a lot of things happen this year.

"I have to look ahead to the next few hours and days to come to try to get the maximum potential of a good feeling in my body. Now I have to see how I sit on the time trial bike.

"Maybe everything turns out OK. The mental aspect is important. I have two legs and I can ride. I have been training many, many hours for the Olympics. We will just have to see how it goes."