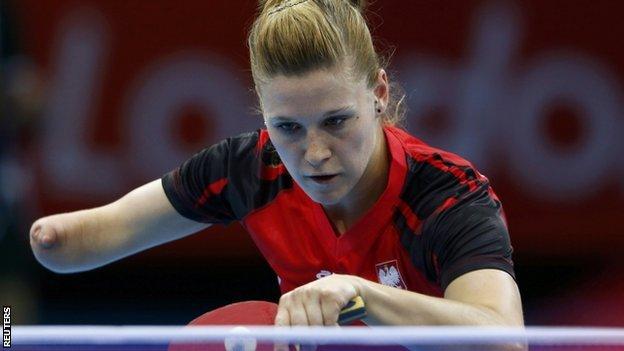 The 23-year-old from Poland, who was born without a right hand and forearm, beat Denmark's Mie Skov 4-3.

Partyka is one of only two athletes, along with South Africa's Oscar Pistorius, who will compete at both the Olympics and Paralympics this year.

She will face Jie Li of the Netherlands in Sunday's third round.

The pair have met twice before, with Partyka losing both of their previous encounters.

Partyka made a slow start against Skov, losing the first game but then won the next two games to go 2-1 ahead.

Skov hit back to take the next two games but Partyka, who is ranked eight places above her rival at 68 in the world, won the last two games for victory.

Partyka also competed at both the Olympics and Paralympics in Beijing in 2008, winning Paralympic individual gold and team silver.

Half of the second round in the women's singles event was completed, with the final eight games to take place on Sunday morning.