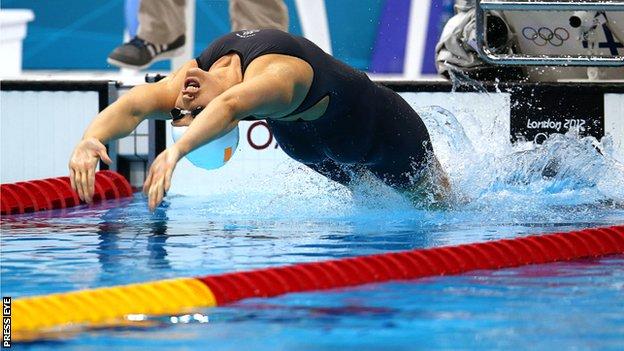 Northern Ireland swimmers Melanie Nocher and Sycerika McMahon have failed to progress from the heats on Sunday.

Holywood woman Nocher finished third in her 100m backstroke heat in 1.02.44 but it was over two seconds short of the qualifying time in London.

Portaferry teenager McMahon was eighth in her 100 breaststroke heat with a time of 1.08.80.

Nocher will also compete in the 200m backstroke while McMahon goes in the 200m individual medley.

The 100m backstroke heats were much quicker than expected and Nocher was well outside the time needed to make Sunday night's semi-finals.

Nocher's personal best of 1.01.92 is 1.66 seconds slower than the 16th and final qualifying time from the heats as she finished 33rd overall.

However, her favourite is still to come with the 200m backstroke heats on Thursday at the Aquatics Centre.

It was a disappointing Olympic debut for McMahon although she was always going to find to tough in a 'seeded' heat.

He time was 0.53 slower than she swam to qualifying for the Games and 0.95 short of the 16th qualifier for the semis as she finished 26th.

McMahon is back in the pool on Monday morning in the 200m individual medley heats.

Ireland's other swimmer on Sunday Grainne Murphy suffered an even bigger disappointment as she was 10 seconds outside her personal best as she finished 31st in the 400m freestyle heats.

The Wexford woman, who has been bothered by a virus in recent months, goes in her main event the 800m on Thursday.

Murphy took silver in the non-Olympic 1500m event at the 2010 European Championships.