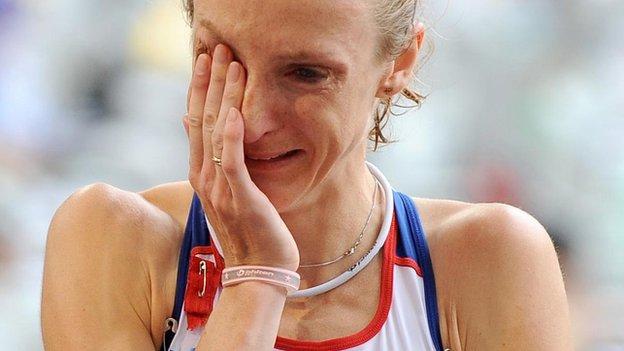 Britain's Paula Radcliffe will not compete in the Olympic marathon in London because of a foot injury.

Below is her official statement:

From the day when it was announced that London had won the bid, taking part and performing well in the London Olympic Games has been a major goal in my life.

The goal of a fifth Olympics, in my home country, what better?

The chance to make amends to myself for bitter disappointments at the previous two Olympics. Through a lot of tough times, it has kept me fighting, motivated and focused. That is why it hurts so much to finally admit to myself that it isn't going to happen.

My sport is a beautiful sport, it gives so much fun and enjoyment, I believe helps me to be a better person and I have been very fortunate to experience some great success and have so many beautiful and happy memories.

However, the downside is that it can break your heart and spirit many times over when your body is simply unable to match what your heart and brain want it to do.

Sadly, mine is not a career or a hobby where mind over matter can work when your body is hurt, nor where giving less than your best each day can ever work.

Yes, I made more commitment than ever in preparation this year, two months away from the three most important people in my life.

However, every single athlete out there makes the same commitments, puts their all into their preparation, and sadly I am not the only one to suffer heartbreak in trying to go after our goals.

The most important thing is, as I always believe, to know that you did all you could in going after those dreams.

Now is the time to rest totally, give my body chance to recover and assess calmly what can be done and where I go from here

It is hard to know that had the Olympics been six weeks earlier I could have gone out there and run confidently knowing that I was in the best shape I had been in for a while, but I am by no means the first to experience something like this.

No-one tells us in advance where the limits of our own bodies lie, and pushing these limits is the only way we can ever achieve our highest goals and dreams.

However hard today is, finally closing the door on that dream, at least I can know that I truly have tried absolutely everything.

Not one day was wasted in getting treatment, scans or interventions that might help. I cross-trained as hard as I could whenever I was unable to run to give myself every chance should the pain settle. Now, however, is the time to accept that it is just not going to settle in time.

As desperate as I was to be part of the amazing experience of the London Olympics, I don't want to be there below my best.

If I can't be there and give it my best, then I would rather someone else who can do that is able to be there.

I have been through the mill emotionally and physically the past three weeks, cried more tears than ever, vented more frustration and, at the same time, calmly tried every direction and avenue available to heal myself.

Now is the time to rest totally, give my body chance to recover and assess calmly what can be done and where I go from here.

In the meantime, I will be supporting the team as strongly as ever and celebrating as they all go after and hopefully achieve their dreams and goals. Already London is showing the world what I knew from that day in 2005, that the London Olympic Games will be one hell of a show!

For details on my foot. Yes, that joint is degenerative and badly damaged. The same foot I was told in 1994 I would never run on again!

I refused to believe it then and I don't believe now that it can't recover and be carefully managed to allow me to still do what I love to do. Unfortunately, though, that isn't going to happen in one week.