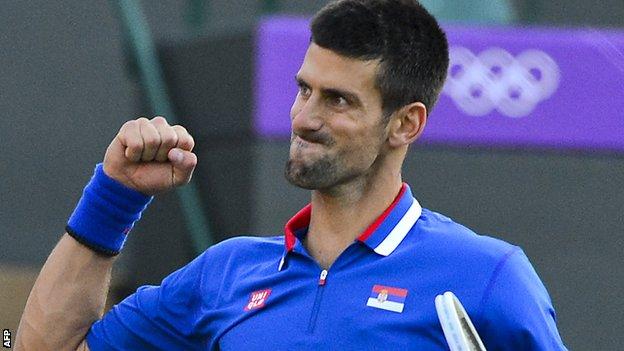 Second seed Novak Djokovic of Serbia came back from a set down to beat Italy's Fabio Fognini in the first round of the Olympic men's singles.

I am just happy to go through for my country. I hope I will continue like this

And third seed Maria Sharapova of Russia marked her Olympic debut with a 6-2 6-0 win over Israel's Shahar Peer.

Djokovic, who carried Serbia's flag in the opening ceremony, lost a first set tie-break and also had to overcome adverse weather before winning 6-7 (7-9) 6-2 6-2.

"I haven't played an official match since Wimbledon so it took me a set and a half to really get into the rhythm and obviously the rain delay affected the game and I wasn't sharp enough after it," he said.

"Fognini made some great winners and he was a set up. Then I had to be really focused for each game, try to break him and the second and third sets were really going my way."

"I'm pretty satisfied with the way I played. I played pretty aggressive and served well."