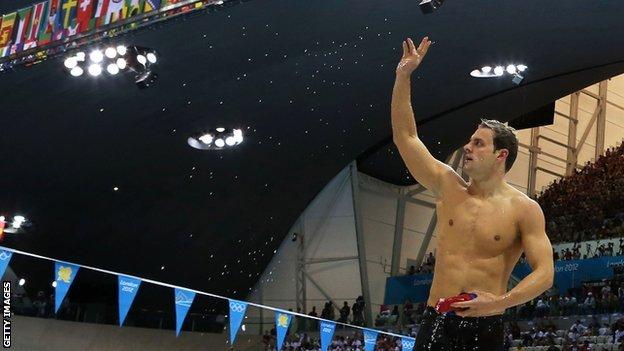 Renwick, 24, tied for third in his race behind American star Ryan Lochte and Germany's Paul Biedermann to reach the men's 200m freestyle final.

An Olympic final, that's what it's all about

Spofforth, 24, was sixth-fastest in the women's 100m backstroke.

Spofforth will race against Missy Franklin of the United States, the 17-year-old aiming for a first Olympic gold medal in the second of her seven opportunities, and Australia's Emily Seebohm on Monday.

Seebohm set the pace in the semis with a time of 58.39 seconds, ahead of Franklin in 59.12 and Spofforth's 59.70. British team-mate Georgia Davies finished eighth in her semi-final.

Tancock had earlier declared himself "really pleased" as he pushed world champion Lacourt in their 100m backstroke semi, finishing in 53.25 to the Frenchman's 53.03. American Matt Grevers may be the man to beat in the final, having clocked 52.66 in the other semi-final.

"I did a decent time again, I'll go back and try to find a few tenths or hundredths for tomorrow hopefully," Tancock told BBC Sport.

"I'm definitely up for this. The crowd is tremendous and thanks to all of you guys out there for helping me swim fast."

Not since 2009 had Renwick posted a time as fast as his semi-final mark of 1:46.65, 0.34 seconds behind Lochte, who won gold in the 400m individual medley on Saturday, and half a second back from Biedermann.

"An Olympic final, that's what it's all about," said the Scot. "And once you get in the final anything can happen. I feel like I have a lot left.

"I know a half-a-second to a second drop is within my capabilities. The home crowd is brilliant and I feel really honoured to represent my country in tomorrow's final."