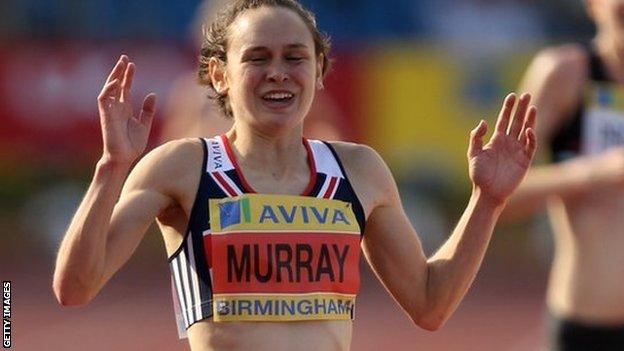 Freya Murray says she is ready to race in the Olympic marathon on 5 August after being called up to replace the injured Paula Radcliffe.

The 28-year-old Scot has been training as a reserve since April and says she is "fit and healthy".

"I knew I was reserve and wanted to be ready to race if the opportunity did come up," she told BBC Radio 5 live.

"I'm not really sure what shape Freya Murray will be in. It's quite last minute. Whether she's had a heads-up I don't know. She may have known for a while she is going to be running. It will be a great experience for her but we shouldn't expect too much. She is a relatively young athlete, so it's a great opportunity for her, but there will be no great expectations on her."

Radcliffe was ruled out on Sunday because of an osteoarthritis problem in her foot.

"It's such a sad time for her and it just must be horrible," said Murray, who runs for both the Chester-le-Street and Edinburgh clubs.

A structural engineer in Newcastle upon Tyne, she becomes the first Scottish woman to represent Britain in an Olympic marathon since Liz McColgan at Atlanta in 1996.

"Paula sent me a message once she made the decision to pull out so it was really good of her and I really appreciated that.

"I'm gutted for Paula and it's horrendous what she's had to go through in the last few weeks, but I'm really looking forward to the opportunity of taking her place."

Team GB chef de mission Andy Hunt added: "We are proud to welcome Freya to Team GB. We know she has been training hard and preparing, and will arrive fully ready to compete and deliver her personal best."