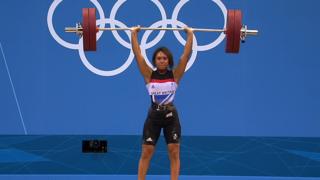 Britain's Zoe Smith breaks the British clean and jerk record on her way to second place in Group B of the women's 58kg weightlifting.

The 18-year-old Londoner was fourth after the snatch with a lift of 90kg, having failed twice at 93kg, which would have been a new British record.

But she succeeded in her second attempt at 121kg in the clean and jerk.