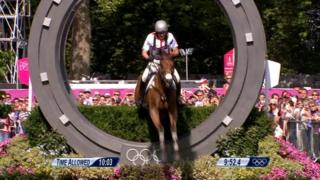 The Queen's granddaughter, Zara Phillips, has kept Great Britain in the running for an Olympics eventing medal after completing the cross-country portion under the pace time.

Thousands of fans - including some royal relations - cheered as she finished in nine minutes and 55.11 seconds.

Riders had to complete the race in under 10 minutes and three seconds.

Phillips told the BBC that the crowd's cheering had been "unbelievable" but the only drawback was that she couldn't hear the timer on her wrist ticking.