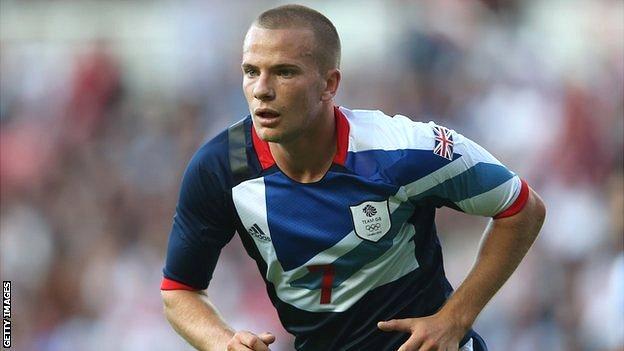 Great Britain midfielder Tom Cleverley has identified a trio of Uruguay players his team must stop in their crucial Group A match on Wednesday.

Team GB face the South Americans in Cardiff knowing that a draw will see them progress at Uruguay's expense.

We must be positive and go for the win, we've got to try to top the group

"Luis Suarez, Edinson Cavani, Gaston Ramirez - they are all good players who can hurt us," said Cleverley.

However, he feels Uruguay are vulnerable, adding: "They have quality but they also have weaknesses."

GB beat UAE 3-1 on Sunday and have four points ahead of their final group game. Senegal, who drew 1-1 with GB, also have four, while Uruguay have three. UAE have still to pick up a point.

"It is a tight group," added Cleverley, who created GB's third goal on Sunday with an incisive through ball to Daniel Sturridge.

"We must be positive and go for the win. We've got to try to top the group. We have got to stamp our mark on the game."

Uruguay skipper Suarez has yet to score at London 2012. The Liverpool striker, who was banned last season after racially abusing Manchester United defender Patrice Evra, was booed at both Old Trafford and Wembley virtually every time he touched the ball.

Napoli forward Cavani has had a disappointing tournament so far, while Ramirez, who plays his club football for Bologna in Italy, scored with a free-kick against the UAE.

Tuesday's encounter will be GB's fifth match since the squad of 18 came together before the Games. They played a behind-closed-doors friendly against Mexico during their training camp in Spain before losing to tournament favourites Brazil in a friendly at the Riverside Stadium.

That was followed by a draw against Senegal at Old Trafford and the victory over UAE - and Cleverley believes the squad are showing a game-by-game improvement as they grow into the tournament.

"We really feel like we are snowballing into a good side now," said the 22-year-old Manchester United player.

Team GB is made up of players from England and Wales, but none of the Welsh contingent have so far sung the national anthem - God Save the Queen - before matches.

Whether the Welsh players change their stance on Wednesday remains to be seen, but Liverpool forward Craig Bellamy is hopeful it will be respected by a crowd of close to 70,000 at the Millennium Stadium.

"National anthems should be respected," he said, adding he "disliked it immensely" when anthems are booed.

"Even when it's my own supporters who dislike a certain group or boo a national anthem, it leaves me very disappointed," he said. "I am not into that in any sport, not just football."