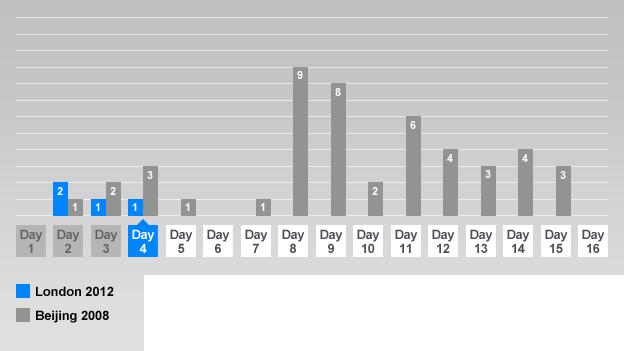 Great Britain's Olympic chiefs insist they are not worried about the lack of Team GB gold medals so far at London 2012.

They say key medal opportunities are expected later this week in events such as rowing, track cycling and sailing.

"There's no sense at all among the team that we're not delivering," said British Olympic Association chef de mission Andy Hunt.

"We are about where we expected to be at this stage of the competition."

Britain had won two silver and two bronze medals by the afternoon of day four of London 2012, but several gold prospects had not come to fruition.

Mark Cavendish in the cycle road race and Tom Daley and Pete Waterfield in the synchronised 10m platform diving were seen as having good chances for gold, but they finished off the podium.

Britain's gold medal haul of 19 at Beijing in 2008 was started on day two of the competition by Nicole Cooke in the women's cycle road race.

However, Hunt is confident about Great Britain's prospects over the next few days and is delighted with the performance of Team GB's male gymnasts, who won bronze in the team competition on Monday.

"Notably, bronze in the men's team artistic gymnastics competition was a fantastic, absolutely fantastic result," he said. "I think we've all seen that celebrated overnight and this morning.

"To achieve that historic outcome of a medal for the first time in 100 years is really, really superb.

"There are key medal opportunities coming up over the next few days and later in the week with rowing, track cycling, time trial, sailing, triathlon and open-water swimming.

"As it always is for Team GB at a Games, it's really as we come in towards the end of the first week that we start to see our opportunities really ramp up in those traditional sports where we tend to excel.

"Overall, I'm satisfied where we're up to and I'm sure we're going to see some great results later on in the week."