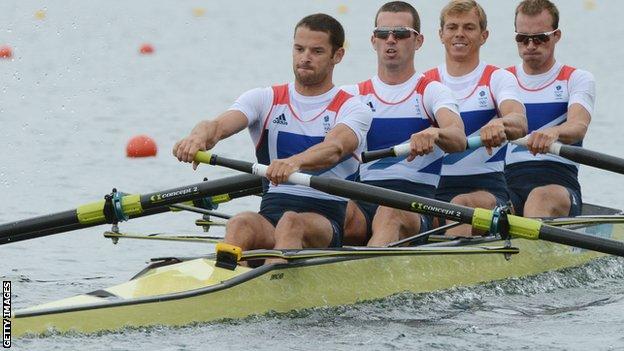 Wrexham rower Chris Bartley is confident his lightweight coxless four crew can achieve gold on Thursday after an impressive win on Tuesday.

Bartley, from Wrexham, was one of the GB crew who qualified fastest from the two semi-finals. and is hopeful his team will peak at the right time.

"If we do the best job we can we'll come away with a win," Bartley said.

"It's all going according to plan for the British lightweight four. They had a fabulous training camp and come here which such speed. I think this is a crew who could do really well."

Bartley, Richard and Peter Chambers and Rob Williams had put on an emphatic performance in the heats when they overhauled world champions Australia to win.

They continued that form in the semi-finals, pacing themselves through the first 1500m before upping the stroke rate and coming through to secure their place in the final.

Bartley said the home support was making a real difference to their performance at Eton Dorney.

"I've had so many messages of support and the crowds have been brilliant...it really does make a difference, especially in that last 500 [metres] - everyone wants you to win it, everyone's cheering for you.

"[It is] what the whole year's been about, the whole four years, every training session trying to get it right on the day, and the day's in a couple of days' time so hopefully we can do it," Bartley concluded.