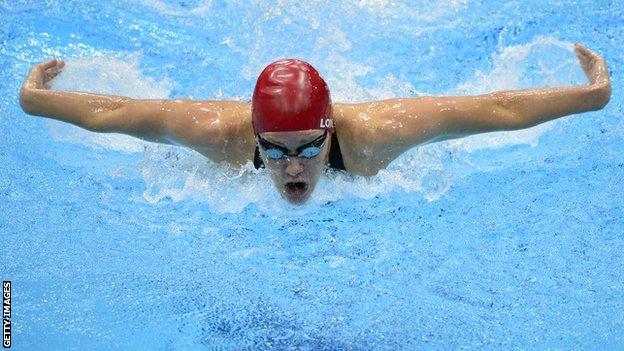 Jemma Lowe finished sixth in the 200m butterfly final after fading in the closing stages.

Lowe, based in Swansea, was in the bronze medal position at the halfway stage but failed to hang on.

"It was an Olympic final and I was really happy to get into it," said the 22-year-old. "I gave it everything I got but it wasn't to be.

"The crowd were brilliant. I was a bit nervous but I have had a good time in my second Olympics."

Lowe, who was born in Hartlepool but competes for Wales, was aiming to be only the third Welsh female swimmer to win an Olympic medal and the first since 1932.

She finished in a time of two minutes 06.80 seconds, her fastest time of the London Games. China's Jiao Liuyang (2:04.06) won in a new Olympic record ahead of Mireia Belmonte of Spain and Japan's Natsumi Hoshi.

In the men's football, GB qualified for the quarter-finals as Group A winners after a 1-0 win over Uruguay at Cardiff's Millennium Stadium.

They will return to Cardiff on Saturday to face South Korea.

Earlier, Welsh weightlifter Natasha Perdue overcame injury as she followed in her late father's footsteps by competing on the Olympic stage.

The 37-year-old from Swansea lifted 113kg with her first lift in the clean and jerk before a leg spasm prevented her from attempting heavier weights.

Perdue picked up the injury in the snatch section, where she lifted 92kg. That gave her a combined total of 205kg and 12th place in the 69kg category.

She managed to return for a successful second lift at the same weight, but almost collapsed again as she left the stage to rapturous applause.

Perdue, whose father Terry competed at the 1968 and 1972 Olympic Games, appeared for a third and final attempt at 95kg, but then felt her left shoulder give way midway through.

A brief interval gave her an opportunity to have treatment on her leg and back, and she managed a successful lift despite obvious discomfort.

With a total secure, Perdue decided to pass on her final two attempts and was almost in tears as she acknowledged the huge ovation from the crowd.

Earlier in the swimming, Marco Loughran failed to progress to the semi-finals of the 200m backstroke.

Loughran finished seventh in his heat - 18th overall - and missed out on qualification by 0.5 seconds.